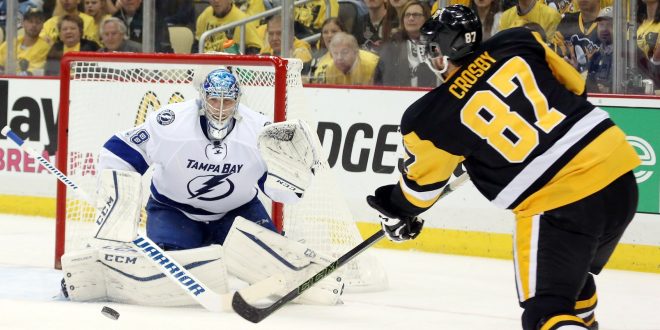 The Tampa Bay Lightning were a goal away from heading back to Tampa with a 2-0 lead over the Pittsburgh Penguins Monday night. Now the Lightning return to home ice tonight after that disappointing overtime loss in Game 2. Both teams head into Game 3 of the Eastern Conference Finals tied at 1-1.

The Penguins tied the series with a 3-2 overtime win Monday night in Pittsburgh. Sydney Crosby’s overtime game-winner gave Game 2 of the series to Pittsburgh.

Crosby’s goal was his first goal since the first round and first OT goal during his career in the playoffs. Crosby understands just how dangerous the Tampa Bay Lightning can be.

Matt Cullen and Phil Kessel put the Penguins up by 2 goals in the first 10 minutes of Game 2. Later in the first period Anton Stralman and Drouin had equalizing goals. Stralman is looking for his team to make improvements heading into Game 3 at home.

The Lightning are without goaltender Ben Bishop, who was injured in Game 1 of the series. Without Bishop the Lightning have turned to Andre Vasilevskiy as their goaltender.

Vasilevskiy had a spectacular performance during Game 1 and Game 2 despite the OT loss. Vasilevskiy will likely get the start in Game 3 but Bishop is expected to return before the series is decided.

Lightning’s captain will not return Steven Stamkos for tonight’s game after undergoing surgery for a blood clot in early April. Forward Ryan Callahan of the Lightning missed Game 2 battling the flu and remains questionable for tonight’s game.