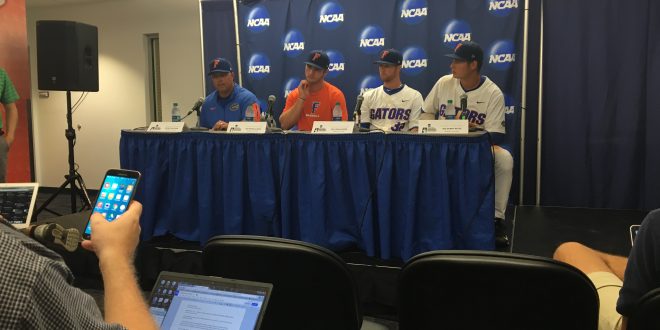 The Florida Gator baseball team (48-13) started NCAA Regional play with a 9-3 Friday night victory over the Bethune-Cookman Wildcats (29-26) in Gainesville.

Florida starting pitcher Logan Shore improved his record to 11-0 with the win, while Wildcat pitcher Tyler Norris fell to 6-4 on the season and took the loss after starting the game for the Wildcats.

Following an hour and 45 minute rain delay, Florida’s defense went to work early. The first three Wildcat batters went down as quickly as they stepped up, with Shore earning one early strikeout.  Gator first basemen Peter Alonso made quick work of his first at-bat after being sidelined for four weeks due to a fracture in his left hand; he hit a two run homer past the center field wall, scoring JJ Schwarz to stake his team to a 2-0 first inning lead.

Alonso says he appreciates time spent on the field with his teammates, because the timing of his injury could have prevented him from ever wearing a Gator uniform again.

In the bottom of the second, Dalton Guthrie hit a double down the left field line which advanced Buddy Reed to third and scored Danny Reyes. JJ Schwarz added a ground out to first base which sent Reed home and made the score 4-0 by the end of the second inning.

Florida’s defense made quick work of the third via a double play, but an error left one Wildcat on base to end the first half of the inning. In the bottom of the third, Deacon Liput added his first hit of the night, a two-out double to right field. and Nelson Maldonado also reached base.  Danny Reyes quickly cleared the bases with a triple to left field, scoring fellow freshmen Liput and Maldonado.

Bethune-Cookman answered back with some offense of their own in the fourth when Wildcat first baseman Danny Rodriguez hit a double down the left field line. Nathan Bond walked, loading the Wildcats’ corners and a Jameel Edney single to center field advanced Rodriguez to make the score 6-1.

Not to be outshone by the visitors, Peter Alonso stepped up to bat for the third time and railed his second homer of the night, once again extending the lead to six runs.

In the top of the fifth, Bethune-Cookman added a couple of singles but left two runners on base.

In the seventh, Shore made an error at first after an impressive catch in the seventh and promptly left the game after a Nate Sterijevski triple scored the Wildcats’ second run of the night.  Brady Singer replaced Shore but ultimately gave up a walk and a single, making the score 7-3.

Florida played some small ball to make the score 9-3 in the bottom of the seventh, sacrifice flies by Liput and Reyes added two additional Gator runs.

O’Sullivan made his fourth and final pitching change as Michael Byrne replaced Dunning to close out the 9-3 win in the ninth inning.

Bethune-Cookman baseball head coach Jason Beverlin says Florida has one of the deepest pitching rotations in the country.

Saturday evening Florida will start Aj Puk on the mound as they play the University of Connecticut in the winner’s bracket.