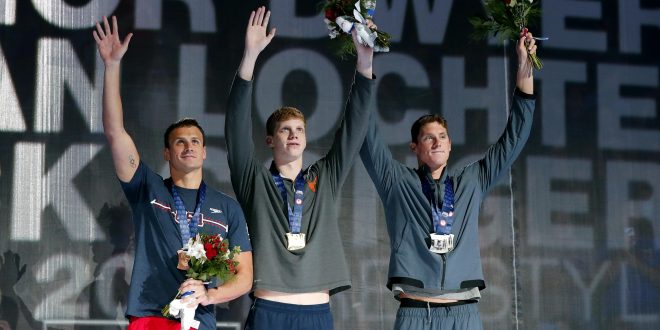 Ryan Lochte to Swim in 2016 Rio Olympics with Fellow Gators

Ryan Lochte will take a trip to Brazil later this summer for the 2016 Olympics in Rio. The former Gator swimmer has qualified for the U.S. Olympic 4x200m team finishing fourth with a time of 1:46.62. Lochte will compete in his fourth Olympic Games on the US 4×200 freestyle relay team.

Ever the perfectionist, Lochte was not happy with his fourth-place finish, although he is grateful for making the U.S. Olympic team. He feels that the time he swam was not his best effort. The 31-year-old missed his chance to compete for the 400m individual medley team on Day 1 of the U.S. Olympic trials.

Dwyer and Lochte aren’t the only Gators to be swimming in Rio waters. Eight other swimmers have qualified for the Olympic teams of their home countries including former Gators Hilda Luthersdottir (Iceland) and Sebastien Rousseau (South Africa), as well as current Gators Eduardo Solaeche-Gomez (Spain) and  Pawel Werner (Poland).

On Day 4 of the trials, nine Gators will compete in three events. Along with Lochte and Dwyer, Caeleb Dressel and Brad deBorde are scheduled for the 100m freestyle. For the women, Elizabeth Beisel, Taylor Katz, Alyssa Yambor-Maul and Sierra Kuhn will compete in the 200m butterfly. Ross Palazzo will be the only Gator in the water for the 200m breaststroke.