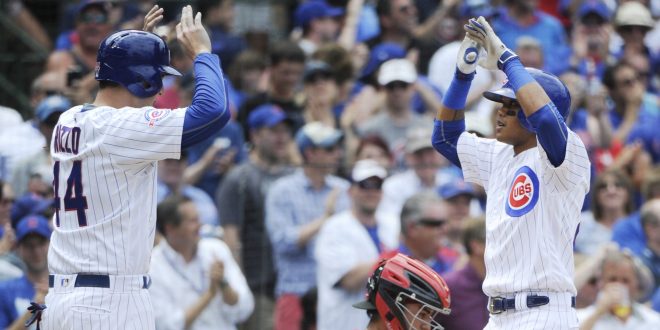 The 2016 MLB All-Star rosters were announced Tuesday night with the Chicago Cubs making history. The young organization became just the second team in MLB history to have its entire infield start in an All-Star game. Anthony Rizzo (1B), Ben Zobrist (2B), Addison Russell (SS), and Kris Bryant (3B) join the 1963 St Louis Cardinals as the second foursome to complete this accomplishment.

Seven #Cubs make the @AllStarGame, with the entire infield starting for just the second time in @MLB history. pic.twitter.com/x7ytvRJ5c2

Cubs outfielder Dexter Fowler was also named a starter making it five total starters for Chicago and likely six with pitcher Jake Arrieta the projected starter for the National League. The other NL starters are Buster Posey (C) of the Giants, Bryce Harper (OF) of the Nationals, and Yoenis Cespedes (OF) of the Mets.

Chicago led all teams with seven selections while the MLB’s best team, San Francisco, only had three players get selected. Joining Posey for the Giants are starting pitchers Madison Bumgarner and Johnny Cueto.

Over in the AL, it was all about the Boston Red Sox who placed an AL-leading six players including four starters. Bostons Xander Bogaerts (SS), Jackie Bradley Jr (OF), Mookie Betts (OF), and David Ortiz (DH) are all starters, while Steven Wright (SP) and Craig Kimbrel (CP) round out the Red Sox six players.

Chicago Cubs President and former Red Sox GM essentially hand picked this years All-Star starters. Of the 17 positional players nine of them were acquired by Epstein.

9 of the 17 position players starting in the 2016 MLB All-Star Game were acquired by Theo Epstein (Red Sox/Cubs). pic.twitter.com/LRUWMrVp8n

Florida teams did not receive a lot of love in the selections this year with Miami having three players selected to the roster and Tampa Bay with only one player selected. Marlins outfielder Marcell Ozuna was selected as a reserve and will be joined by reliever AJ Ramos and newly acquired closer Fernando Rodney. Reliever Alex Colome was the only player selected for the Rays, but Tampa Bay third baseman Evan Longoria could be heading to the All-Star game as well. Longoria is up for the AL’s final man vote, which is voted on by the fans.

The All-Star game is on Tuesday July 12 with first pitch from Petco Park in San Diego set for 8 p.m.

Im a senior at the University of Florida currently pursuing a degree in Telecommunications. I work for ESPN Gainesville 95.3 and anchor the Monday sports broadcast for WUFT First At Five. Im from New York and an avid sports fan of all New York teams.
Previous Wimbledon Coming to an End
Next Marlins Fall to Mets