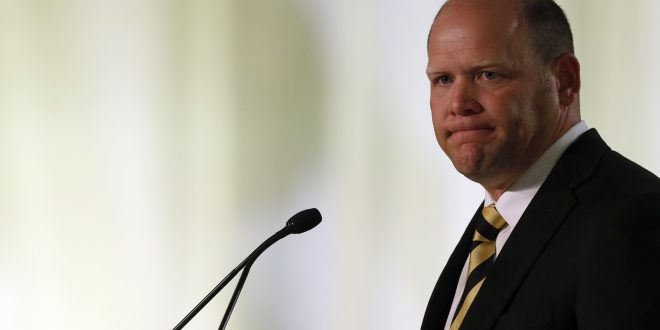 On the final day of SEC Media Days, Barry Odom took the stand as Missouri’s head football coach.  Odom has inherited probably the most turbulent job in the SEC, and arguably the nation.  Last fall, the University of Missouri football team faced a threat within their own team as more than 30 players would not participate in any practices or football games until the principal, Tim Wolfe resigned.  This came from Wolfe’s response to the racist actions occurring on campus considered to be unsatisfying.

Eventually, Wolfe resigned and the football team commenced to continue on their season, ending it with a 5-7 record.  Though,  the effects of this protest included a recruiting class disaster where recruits were de-committing and all-time winning head coach for Missouri Gary Pinkel resigned.  If that wasn’t enough, yesterday, Athletic Director  Mack Rhodes abandoned ship for another Athletic Director job in a program riddled in scandal, Baylor.  Odom has many obstacles to overcome in such a difficult landscape in the attempt to get Missouri back on track.

With the recent rigid landscape, Odom preaches a positive message for the upcoming football program.  Odom strongly believes that the University of Missouri will find a new worthy Athletic Director.  He is very dedicated to the program as he has been with Missouri since 2003 and slowly climbed his way from a graduate assistant to head coach and even played his college football here.  He looks forward to this season with an optimistic attitude and believes in the schools ability to survive the disaster that fell upon it last season.

Missouri Linebacker Michael Scherer was brought along for SEC Media Days.  Scherer tallied 90 tackles last season for his second consecutive season.  Scherer elaborates Odom passion and fire to get involved with the players is a different approach than Pinkel’s.  With the aid of Schreer and others, Missouri’s defense became 6th in the nation in defensive categories of total defense, defense against the pass, and points allowed a game.

With these impressive stats,  it would be silly to not consider the fact they are returning eight of their starters scary.  Scherer comes into this season hoping to be able to replace All-SEC Defensive First Team Linebacker Kentrell Brothers and lead a monster Missouri defense.

Overall, this season is an important showcase that will display the football programs response to the last year’s events.  It is a display of pride and unity of a University that was once separating at the seams.  Missouri odds of going to Atlanta according to many are slim, with ESPN’s FPI Index giving them less .1% of a chance to win the conference championship and the SEC Media stating they will finish 6th in the Eastern Division.

Though, Odom keeps his head high and believes in his team, with hopes to bring the glory days back to Columbia by winning the conference championship a feat Missouri hasn’t accomplished since 1969.