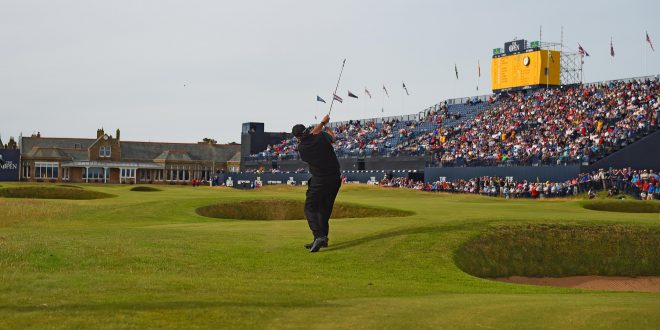 The 145th annual 2016 British Open is underway at Royal Troon Golf Club in Scotland. The major commenced on Thursday and has already been somewhat bittersweet for the leader.

When you’re an elite golfer like Phil Mickelson records are your goals along with winning. Although he still remains in first with the start of Friday’s competition, he came as close as someone could  get to making a historic 62 with his putt at the Royal Troon’s 18th hole.

Phil Mickelson came SO close to a low major score of 62 #TheOpen pic.twitter.com/n91YpkelLG

Mickelson was pleased with his opening round, but with how close he was to making the 62 made it was bittersweet. Mickelson’s 63 was just the 28th in major history and ninth in Open history. Mickelson still has more opportunities to make history at this tournament.

If he wins it he’d be the third oldest at age 46, major champion in history, behind Julius Boros and Jack Nicklaus at ages 48 and 46 respectively.

Thursday was also a day for the Americans, six of the top seven golfers at the Royal Troon were from the United States.

Fridays rounds have included some rainy conditions but Mickelson at last look, still leads with 10 under par through 18 holes.

The British Open continues today in Scotland all the way until Sunday the 17th with live coverage on the Golf channel and NBC.

Watch: Phil Mickelson extended his lead with a brilliant birdie putt at the 14th #TheOpen pic.twitter.com/7imMrJETP8