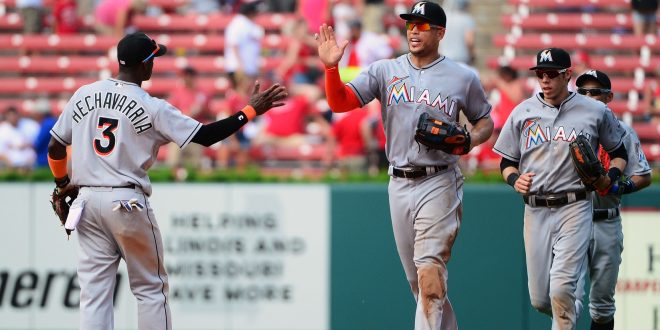 Marlins Start Second Half of the Season With Series Win

The Marlins have a promising start to the second half of the season as they started it off in St. Louis. The Marlins won the series 2-1 and are showing that they are a contending team to make it into the postseason.

In Friday’s game, the Cardinals sent four balls over the fence, but the Marlins didn’t let that get the best of them. A single by Miguel Rojas in the top of the ninth gave the Marlins the one last run that they needed in a game where the lead changed five times. With a 7-6 win, the Marlins stretched their winning streak to four games.

On Saturday, the Cardinals shut down the Marlins. Cardinals pitcher Adam Wainwright pitched a gem by limiting the Marlins to only 3 hits the entire game. The veteran pitcher threw a complete game shutout and pitched a no-hitter for the first five innings. The Cardinals took the game 5-0, but the Marlins had a couple diving plays in right field by Giancarlo Stanton.

The Marlins bounced back with a 6-3 win on Sunday. The Marlins made up for the lack of hits on Saturday and had 13 on Sunday. Christian Yelich drove in half of the Marlins runs and 42-year old Ichiro Suzuki continues to prove that age is just a number in baseball. In this past weekend alone he is batting .667 with an on base percentage of .714. In Sunday’s game, he had three hits, reached base four times and is only six hits away from 3,000 Major League Baseball career hits. If he reaches this milestone, he will be the 30th player in Major League Baseball to do so.

"We're never out of the game, no matter the score. We just keep pushing & pushing. That's the type of team we are." pic.twitter.com/bhd6CmBc1a

The Marlins are tied with the Mets for second place in the NL East and are six games behind the first place Nationals. They will now head to Philadelphia to take on the Phillies in a four-game series.

Senior telecommunication and history major at the University of Florida and contributor for ESPN Gainesville 95.3. Baseball and hockey are my favorites, but I love all sports.
@MichelleSpring6
Previous New Hampshire 301 Winner Matt Kenseth Fails Car Inspection
Next How Week 15 IN MLB Looks for the Marlins, Rays, and Braves