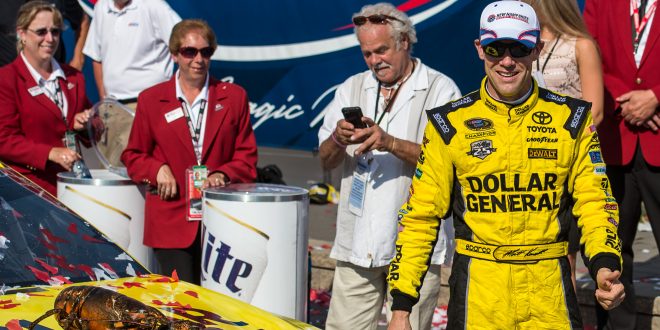 The Joe Gibbs Racing No. 20 Toyota race winner Matt Kenseth failed the post-race inspection on Sunday. The car did not meet the compliance in the laser inspection station after Sunday’s New Hampshire 301 and the car will face further scrutiny this week at the NASCAR Research & Development Center. As for the race runner-up Stewart-Hass Racing No. 15 Chevrolet Tony Stewart who passed the inspection will also be taken to the NASCAR R&D Center for evaluation.

Finishing in third place for the New Hampshire Motor Speedway was Joey Logano, forth place was Kevin Harvick and fifth place was Greg Biffle.

Kenseth earned his 38th career win in a New Hampshire 301, which is dominated by the same drivers who have dominated all season. The race had some potential, but it all came crashing when Kenseth no doubt earned the win in front of a disappointing crowd.

The penalty for this kind of failure had been a 15-point deduction and a $25,o00 fine for the screw chief . This is the first time a race winner has been caught since the lasers were established in 2013.

Although NASCAR is not expected to revoke Kenseth’s victory it could lead him from falling fourth to fifth in the standings if he is penalized for the accusation.

If any penalties are assessed, they will be announced on Wednesday.

Previous Rays Continue to Struggle, Remains Optimistic
Next Marlins Start Second Half of the Season With Series Win