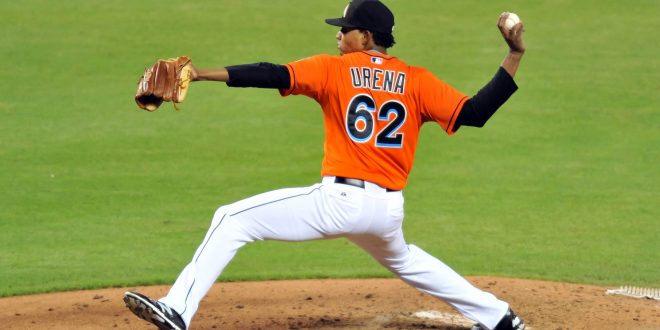 The Miami Marlins moved up one spot to #12 in the ESPN power rankings for week 16. Their current record is 53-45 after losing a three day series with the Mets yesterday(1-2), leaving them one of several teams still battling for the two wild-card spots.

The Marlins started with Jose Urena, who gave up just four hits and one run over six innings, but couldn’t score a single run against Mets’ pitcher Steven Matz, leaving the score at 3-0. Going into the series, the Mets were 1.5 games behind the Marlins for the final spot. That lead has now shrunk to only half a game.

Unfortunately for Miami, manager Don Mattingly confirmed that starting pitcher Wei-Yin Chen was placed on the 15-day disabled list after an elbow injury. Chen, who has a 4.99 ERA this season, signed a 5-year, $80 million deal with the Marlins in January. Mattingly said, “We’ve got to be cautious with him. We don’t feel like it’s anything crazy, but we also want to be careful.”

Jarred Cosart is predicted to take Chen’s place Monday when the Marlins start a three game series with the Philadelphia Phillies at home. Cosart started the season for the Marlins with a 7.98 ERA in three starts. Also out with injuries tonight are Carter Capps, Bryan Morris, and Justin Bour. Going into tonight’s game, right fielder Ichiro Suzuki is just four hits from becoming the 30th player in MLB history to collect 3,000 hits.