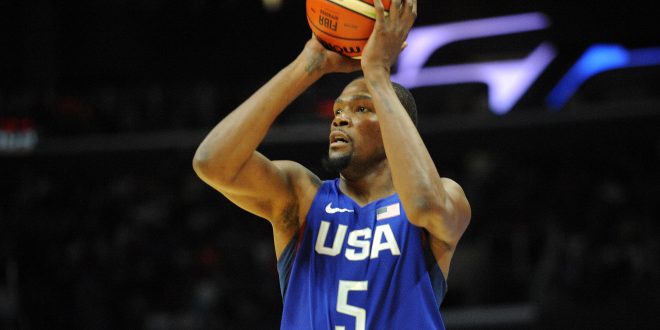 Just a few short days after their big win over Argentina, team USA won its second of five exhibition games leading up to the Olympics in Rio. Team USA outscored team China by a final score of 106-57 on Sunday night at the Staples Center in Los Angeles.

Though this Chinese team is younger than the Americans, with an average age if just 23, they should not be underestimated. The Chinese squad won the FIBA Asia championship last year. However, in Sunday’s game, team USA had more than doubled up China late in the second quarter.

Sacramento Kings’, Demarcus Cousins had a great first half with a dozen shots and was a perfect five for five from the floor. After the half, team USA had a 46 point lead early in the 4th.

Kevin Durant pulls up from way beyond the arc at the top of the key for the #USABMNT 3 on @NBATV! #RapidReplay https://t.co/Em12ihKeEb

Durant, who left the Thunder after the season was over to play for the Golden State Warriors, will step out on his home court for the first time on Tuesday when Team USA takes on China for the second time at the Oracle Arena in Oakland, California.