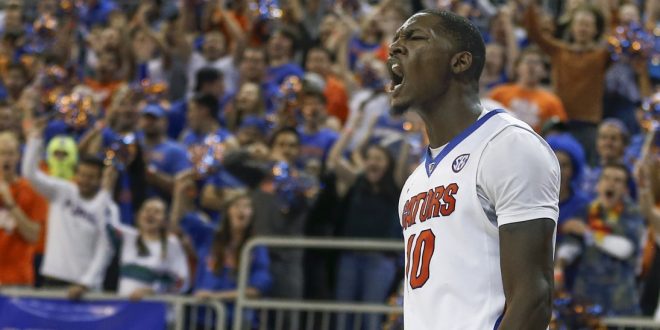 After leading the Gators in both scoring and rebounding during his senior year, Dorian Finney-Smith remained a free agent following June’s 2016 NBA Draft.

However, the 6’8″ forward isn’t out of the woods yet. With Dallas’ training camp in September and limited spots available on a competitive NBA roster, Finney-Smith will be tasked with earning his role.

According to Finney-Smith, this month he’ll need to stay in the gym, eat right, and get plenty of sleep. Meanwhile, he says it also helps to surround himself with the right people. 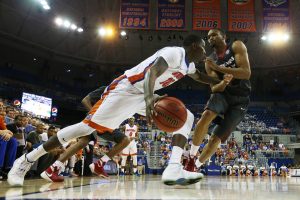 After spending his freshman year at Virginia Tech, in 2012 Finney-Smith joined head coach Billy Donovan and the Florida Gators. “Doe-Doe”, as he came to be known by Gator fans, then sat out a year due to NCAA eligibility sanctions.

It didn’t take Finney-Smith long to make an impact. In 2014, he was named the SEC Sixth Man of the Year as he helped Florida reach the NCAA Final Four.

Foregoing the draft, Finney-Smith averaged 14.7 points and 5.9 rebounds a game during his final season. He says the extra season at Florida helped him develop as a player while growing with teammates.

While Finney-Smith likes his chances of making the Mavericks’ roster, he says he must remain solid defensively as he finds his shooting rhythm against the elevated NBA talent.

When asked about the differences between playing under head coaches Mike White and Billy Donovan, Finney-Smith said each coach has a different style but both taught him to be a better player.

I'm a senior studying Political Science at the University of Florida. Multimedia Sports Reporter for ESPN Gainesville 95.3 and WUFT - Passionate about life, sports, and fitness.
@charliejordanuf
Previous Hargreaves and Fowler in Full Swing at NFL Training Camps
Next Rays and Royals Begin Series

It is speculate that the Los Angeles Dodgers will repeat and once again, win the …