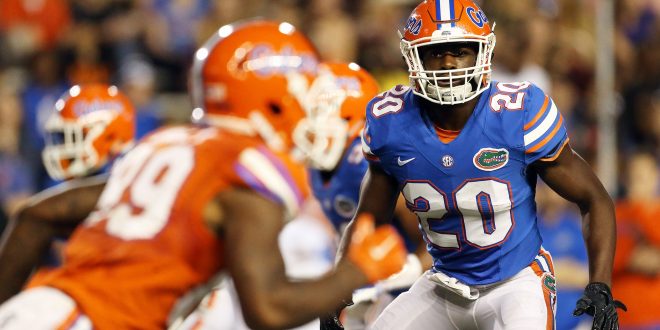 College football is right around the corner and that means team previews. Phil Steele’s 2016 preview is out and it’s time to see where your favorite college football team ranks.

Starting with the Florida Gators, Steele ranks Florida’s defense once again in the top 10. Not only does Florida have a top defense in the SEC, but Steele also says Florida has the seventh best defensive front in the entire country. It’s known that Florida had offensive troubles once Will Grier left. An improved offense will benefit the Gators, but Steele says the Gators have three key games during the season. Those key games are at Tennessee, LSU, at Arkansas, and Georgia. Taking all of those factors into account, Steele places Florida tied for second in the SEC with Georgia.

As for his pick to win the SEC East, that honor goes to Tennessee. Steele says that Tennessee is a little bit ahead of Florida and Georgia because of experience. Some of the factors that influence this is that Tennessee has had the same head coach for the longest time and also have 17 returning starters.

In the West, Steele has Alabama and LSU as the top competitors with Ole Miss as a possible team to head to the top. Ole Miss has a chance to jump into the mix with Chad Kelly at quarterback and a good defense. However, Steele says it really comes down to Alabama and LSU. Alabama has the best defense in the country and have three seniors who opted to return to Alabama and have five returning starters. He says that offense is not a problem for Alabama, but they have a schedule which puts them up against difficult teams on the road. LSU on the other hand has Steele’s number two defense in the country and best running back in the country with Leonard Fournette. Steele puts LSU’s offensive line at the fifth best and the only potential question mark is at quarterback.

Turning to the ACC, Steele says that Clemson has the number one offense going for them. Steele also sees Florida State as a team that will challenge Clemson. Florida State will play Clemson at home and have an (11-1) record when playing Clemson in Tallahassee.

In the Big 10, Steele sees Michigan ranked the highest because they have a solid defense and offense. He says that their downfall may be the fact that three of their last five games are on the road. Iowa is his pick to win the West. Iowa went 12-0 last year and has eight returning starters. Their schedule is also very favorable. That being said, Ohio State is the team that he thinks is going to win it all. He says that Ohio State will have a few games under their belt by time they face their more difficult opponents.

In the Pac-12, Steele says he can see many teams capable of winning their divisions. In the North, those teams are Washington, Stanford, and Oregon. In the South, USC, UCLA and Utah. What makes the Pac-12 unique is that they play each other so much. A team can also rank high in the country and not make it to the playoffs.

Finally, in the Big 12, Steele says that Oklahoma is the team to make it. They are the only Big 12 team in the in the top 10, but Oklahoma has not finished above 15 whenever they have been a top five team in the preseason.

These are just some of Phil Steele’s previews, but what it is certain is that college football season is almost here.

Senior telecommunication and history major at the University of Florida and contributor for ESPN Gainesville 95.3. Baseball and hockey are my favorites, but I love all sports.
@MichelleSpring6
Previous Rays and Royals Begin Series
Next USA Men’s Basketball Ready For Olympics