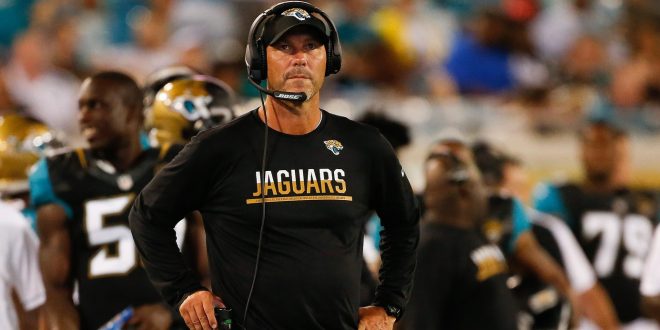 Jaguars Look Ahead To The Regular Season

The Jacksonville Jaguars will look for their first preseason win against the Cincinnati Bengals on Sunday night in front of the whole nation on NBC.

The Jaguars have lost their first two preseason games to the New York Jets and the Tampa Bay Buccaneers. Even though all teams want to win, the Jags feel it is more important to get ready for the regular season.

For the Jaguars, it’s getting ready to face the Green Bay Packers to open the regular season on September 11. The Jaguars are making sure every player is in playing shape and avoiding injuries.

They want every player, at least their most important ones, healthy going into Week 1. For example, former Florida Gator Dante Fowler Jr. will make his NFL debut after missing his entire rookie season with a torn ACL. The Jaguars want to make sure he is physically and mentally prepared for the Packers.

The Jaguars must be ready to face the Green Bay Packers. Jacksonville Jaguars Head Coach Gus Bradley has tons of respect for the Packers and is excited to open the season against them.

Packer quarterback Aaron Rodgers will look to bounce back after what some consider to be a down year last season. Plus, Packer wide receiver Jordy Nelson, like Fowler, returns after missing all of last season with a torn ACL.

Previous Fernandez, Marlins Look to Make a Comeback vs. Royals
Next McElwain and Gators Continue to Grind