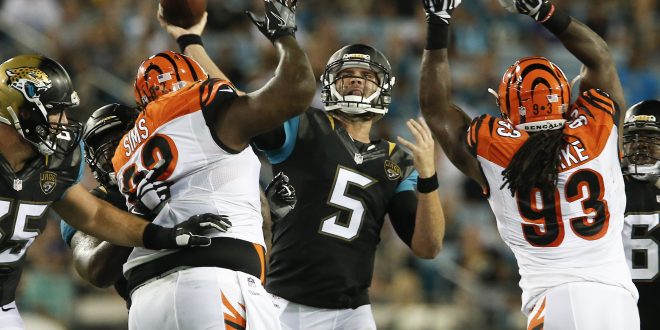 Going into Sunday’s game at EverBank Field, the Jags were 0-2 in the preseason while the Bengals were 1-1. And even though the Jaguars came out of it with a win, their dress rehearsal against the Bengals highlighted where they still need to improve.

The Jag’s appeared to struggle on both sides of the ball. Running back TJ Yeldon fumbled on the opening driving. During the first half quarterback Blake Bortles completed 10 of 16 passes for 52 yards with no touchdowns and no interceptions. He was also flagged for a false start along with Brandon Linder. He said that the team’s sloppy performance was a result of mistakes at all positions. At halftime the Jags were losing 14-3, and the starting offense and defense was rotated off, giving rookies like defensive end Yannick Ngakoue a chance. Things picked up for the Jags’ offense in the third quarter with touchdowns by Joe Banyard, Neal Sterling and Haye Pullard dragging the team to a 26-11 win.

Sunday also marked the preseason debut of left tackle Kelvin Beachum, who was out of the first two games recovering from a torn anterior cruciate ligament from last season. Beachum is competing with Luke Joeckel for the position of starting left tackle.

The Jaguars have their last preseason game on Thursday when they take on the Falcons at the Georgia Dome at 7 p.m.

Previous Cowboys’ Tony Romo Out With Back Injury
Next Gators Prepare for UMass; Callaway Cleared