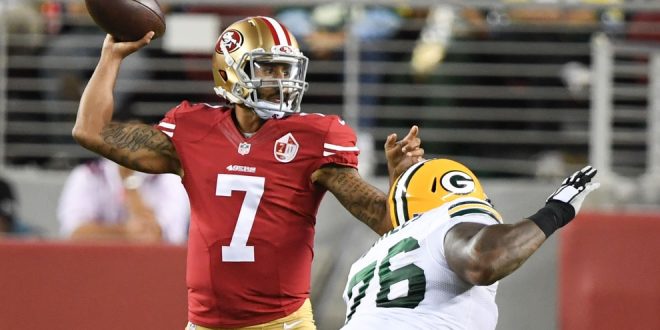 Colin Kaepernick isn’t standing for the national anthem — but he will be standing his ground.

When Kaepernick’s San Francisco 49ers hosted the Green Bay Packers in a preseason game Saturday, he remained seated when the national anthem was played.   Kaepernick’s actions started a firestorm of protest, opinion and discussion but he explained his actions saying he can’t stand for what he feels the American flag represents right now.

The protest comes amidst recent controversy surrounding police force used against African Americans and other minorities. The move ignited criticism and conversation amongst not only the NFL but fans as well.

Reactions have varied, but he says he has been supported by his teammates; wide receiver Torrey Smith said he gets why people are mad but is less focused on how he did it but why.

Others have been less enthused.

I will be STANDING during the National Anthem tonight. Thank you to ALL (Gender,Race,Religion)that put your lives on the line for that flag

New York Giants offensive tackle Justin Pugh shared his view as did other members of the Giants; the entire Giants team and staff sent a different message from Kaepernick’s. During their preseason game against the New York Jets on Saturday, they stood deliberately down the sideline as the Star Spangled Banner played.

Even some San Francisco fans have voiced their opposition, one posted a video of a burning Kaepernick jersey as the national anthem played.

This isn’t the first time an pro athlete has used their platform to send a message. Recently, the Liberty and Lynx WNBA team honored African Americans as well as Dallas police officers who were killed. The 2016 ESPYs featured NBA players who called for change and urged other athletes to join the conversation.

Kaepernick said he didn’t plan for his decision to take headlines, but he thinks it’s a good thing because of the awareness it has brought.

Whether you stand with Kaepernick or not, he will continue to sit.