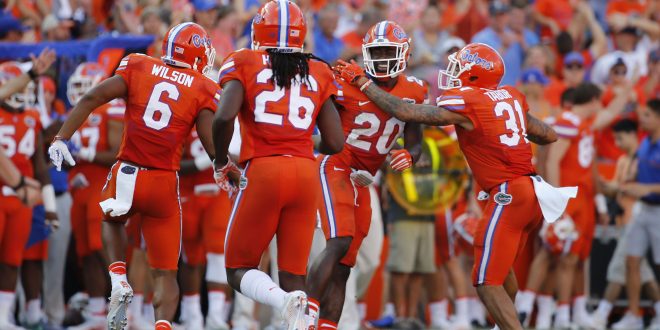 Leading up to Saturday’s kickoff, a lot of talk and uncertainty was focused around the Gator offense. People wanted to know why Florida struggled offensively against UMass and what changes would be made when going up against an SEC opponent. People knew the Gator defense slipped up a bit by committing a number of penalties and getting beaten on a few pass routes in the secondary, but a handful of defensive personnel were also missing in action last week.

Overall, the defense gave up just 187 total yards against UMass and most of it came on three busted plays.   Built around three senior linebackers in Jarrad Davis, Daniel McMillian and Alex Anzalone and with a junior and senior dominated unit elsewhere, the Florida defense was stifling against the Wildcats.

Anzalone had three tackles shortly after kickoff, and Kentucky only ran three plays before being forced to punt.

Well, if Gator fans thought they were somewhat confident in their defense last week, this game against Kentucky should make them even more confident.

For the first time since 2009, Florida’s defense held consecutive opponents under a total of 200 yards as Kentucky amassed just 149 total yards. As time elapsed late into the third quarter, the Gator defensive backs had more receptions (3) than the Kentucky receivers (2).

Quincy Wilson started the interception frenzy as he made the crowd and social media go crazy when he reeled in a one handed interception down the sideline, perhaps the game’s best play. Wilson says the forced turnovers helped the Gator offense to score some of its points.

Marcus Maye also had an interception and Jalen “Teez” Tabor had one as well, knifing in the middle of a trips formation to anticipate a throw, beat a block and get a pick.

Florida only allowed Kentucky nine first downs throughout the duration of the game and the Wildcats had 12 third down attempts and converted just four.

The Gator defense forced four Kentucky turnovers, which got the offense back on the field with more chances to score. If the old saying “defense wins championships” is true, at least through two games, the Gators have a great shot at success this season.

A senior at the University of Florida reporting on Gator sports, local Gainesville and surrounding area sports, and telling the stories of local athletes. Born and raised in Gainesville, Florida with a passion for telling people's stories and having fun doing it.
@SportsDarwinism
Previous Gator Football Trounces Kentucky in Historic Victory
Next Jaguars Host Packers on Opening Weekend