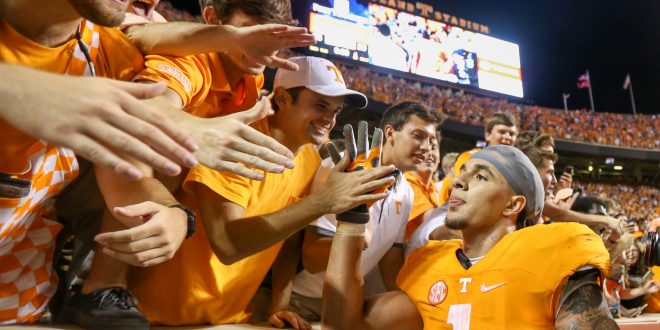 The Tennessee Volunteers started out this season ranked as one of the top ten college football teams in the country. However, the Vols have been falling down the rankings each week.

The Vols gave fans a scare against Appalachian State during their first game of the season, winning 20-13 in overtime. The next week the Vols went to Bristol, Tennessee to face Virginia Tech where the Vols finally pulled away towards the end of the game winning in 45-24. This past weekend, Tennessee faced Ohio University and won 28-19.

Although the Vols are undefeated, they have not played nearly as well as expected. The Vols will undoubtedly face some challenges against the No. 19 Florida Gators on Saturday. The Gators have the No. 1 defense in the nation, while the Tennessee offensive line has struggled this season. Tim Priest, the current football analyst for the University of Tennessee’s Vol Radio Network, says they have been rather “vanilla”. The Vols haven’t made much progress and haven’t done well in protecting quarterback Josh Dobbs.

The Florida Gators are coming off of a 32-0 blowout win over North Texas, but come into the game with a number of injuries. Starting quarterback Luke Del Rio  was hurt in the game after a low hit to the knee and has been ruled out against the Vols. Star wide receiver Antonio Callaway is still suffering the effects of a quad injury from the Kentucky game and his status is still up in the air for the matchup this weekend.

The Vols seem to have injuries on their side as well with top cornerback Cam Sutton out with a fractured right ankle, middle linebacker Darrin Kirkland Jr. out with a high ankle sprain and reserve linebacker Quart’e Sapp’s season now over with an ACL injury.

The Florida-Tennessee rivalry goes deep, with both schools being in the SEC East. Florida certainly seems to have the crown right now, having not lost to the Vols since 2004.

Panic seems to be starting to set in with Tennessee’s first SEC foe coming into Neyland Stadium. Priest says that fans even know that no matter what happens it seems the Vols always come up short against the Gators.

Tennessee fans are aware of this 11 game losing streak to the Gators and it seems to be a painful memory, especially when these losses come from behind.

Will the Gator dominance continue? Or will Vols fans finally rejoice in their first defeat of the Gators in over 12 years?

The Tennessee Volunteers and the Florida Gators have their SEC East showdown at 3:30 p.m. on CBS this Saturday in Knoxville.