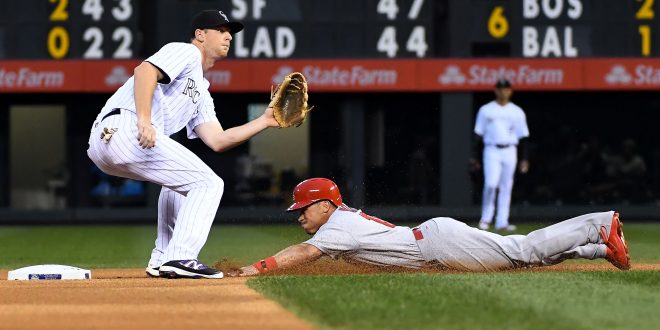 The Mets were at the top of the Wild Card position before Tuesday’s action with a record of 80-70, while both the Giants and Cardinals were competing for the second Wild Card with 79-71 records, trailing just one game behind New York.

After all of the dust settled on Tuesday, all three teams ended the day with an 80-71 record. The trio has been trading places in the NL standings all month.

The Cardinals enjoyed the biggest victory, behind starter Adam Wainwright. St. Louis defeated the Rockies 10-5 at Coors Field after Wainwright proved to be impressive at the plate, collecting a career-high four RBIs. Matt Adams and Jedd Gyorko homered to help St. Louis pull even with the Mets.

Wainwright says the team is staying on top of things and taking it one game at a time.

The Giants also came out with a win on Tuesday, beating rival Los Angeles Dodgers, 2-0 to stay alive in the NL West. Eduardo Nunez and Brandon Belt hit solo homers to help Johnny Cueto pick up his 17th victory. The Giants’ bullpen worked 3 2/3 shutout innings to close out a 2-0 shutout of the Dodgers. San Francisco may face some issues in the future after key contributors Brandon Crawford and Cueto exited the game early with injuries. Crawford dislocated his left pinkie in the second inning and Cueto left in the sixth inning with a strained groin. Cueto is scheduled to have an MRI on Wednesday and Crawford’s status is day-to-day.

The Mets lost their second straight one-run game to Atlanta. Braves starter Julio Teheran held New York to one run and five hits over seven innings, but just as the Mets started their comeback attempt, they fell short in the eighth inning. Atlanta has won four straight games, two against New York and two against the Washington Nationals before that.

Mets outfielder Curtis Granderson says he still feels good, despite the loss, but there are still a lot of opportunities to play and make up for it.

All three teams have 11 games left. The Mets host the Braves for two and the Phillies for four games to end their home schedule. Their season will end next week with three games in Miami and three in Philadelphia.

The Cardinals are on the road right now in Colorado and then in Chicago against their arch rivals, the NL Central champion Cubs. St. Louis then returns home to finish of its season with four games against Cincinnati and three against the Pirates.

St. Louis Cardinals Manager Mike Matheny says it’s up to the Cards to control their own future because each game is different.