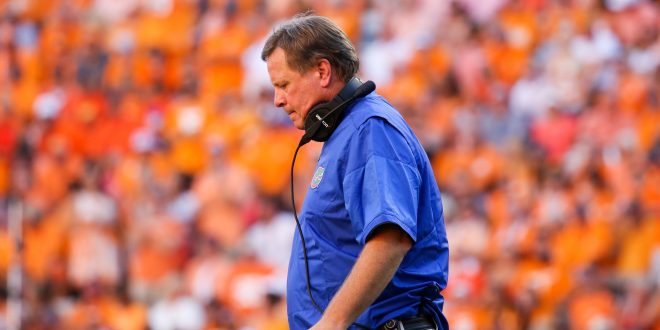 After starting fast and completely controlling the first half, the Florida Gator football team (3-1) dropped a 38-28 decision to the Tennessee Volunteers (4-0) on Saturday in Knoxville, Tennessee. Florida’s road loss marks the first time since 2004 that the Volunteers have beaten the Gators.

After being outgained 336 to 102 in total second half yardage, Gator football head coach Jim McElwain said he was “really disappointed” with Florida’s effort.

Despite losing starting quarterback Luke Del Rio to injury, Florida’s first offensive drive seemed like business as usual for the Gators. Gator Quarterback Austin Appleby seemed poised in the pocket on his first throw of the day, a 51-yard bomb to wideout Antonio Callaway. Callaway’s catch and run set Appleby up with an easy three yard pitch and catch to receiver Dalton Goolsby, opening up a 7-0 lead.

Tennessee’s first drive was easily stopped by Florida, but Antonio Callaway muffed a punt and Tennessee recovered at the two yard line, setting the Volunteers up with tremendous field position. Tennessee was unable to punch it into the end zone, however, going for it on fourth down but not making a touchdown.

Florida’s defense was assisted by some Volunteer drops and Tennessee punted three times by the end of the first quarter. Despite playing well defensively in the first half, McElwain said the Gators didn’t tackle well and were affected by the environment of Neyland Stadium.

After trading possessions, Florida made the score 14-0 by way of Appleby’s 15-yard screen pass to tailback Jordan Cronkrite. The scoring drive was Florida’s longest of the season at 93 yards. McElwain said Appleby played admirably and managed the game well.

The Gator defense then allowed Tennessee to get as far as Florida’s three yard line, but Vols quarterback Josh Dobbs threw his first interception of the day to cornerback Quincy Wilson.

The Gators marched 80 yards downfield and extended the lead to 21-0 as tailback Jordan Scarlett scored on a one yard touchdown run.

Tennessee managed to bring the score to 21-3 at the end of the first half as Aaron Medley nailed a 28-yard field goal.

The Volunteers started the third quarter by turning good field position into a promising drive. The drive ended with another Gator takeaway, as defensive pressure by Caleb Brantley altered a pass from Dobbs that ended up in the outstretched hands of Jalen “Teez” Tabor.

The Gator offense couldn’t put together a drive, and Tennessee responded by moving the ball 64 yards downfield as Dobbs found a wide open Jalen Hurd in the end zone. In the third quarter, Florida’s offense produced three consecutive three-and-outs, allowing Tennessee to make the score 21-17 via Dobbs’ second touchdown pass — a 20-yard throw over the middle to Ethan Wolf.

Appleby gave credit to Tennessee for making the necessary second half adjustments.

Florida’s fourth quarter began with another three-and-out, before Tennessee took a 24-21 lead with a 67-yard touchdown pass from Dobbs to Jauan Jennings.

Following an interception thrown by Appleby, Tennessee went up 31-21 quickly with a fourth touchdown throw by Dobbs, this time a 42-yard catch and run by Josh Malone.

Tennessee deflated Florida’s hopes and made the score 38-21 after Josh Dobbs added his fifth total touchdown with a five yard scoring run.

The Gators managed a pass-heavy fourth quarter scoring drive, capped off by Appleby’s 10 yard strike to freshman wideout Freddie Swain — which left the final score at 38-28. Appleby said he’s proud of his team for the way they fought, despite the obvious disappointment in losing.  Appleby finished the day 23 of 39 for 296 yards with three touchdowns and one interception.

Looking forward, Coach McElwain said the Gators will continue to work and now is the time to see what they’re made of.

Florida will be in Nashville facing the Vanderbilt Commodores next week.