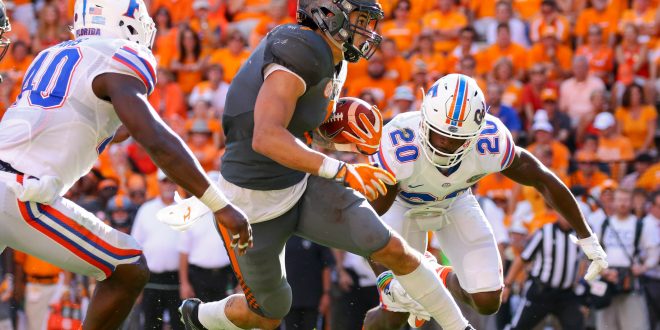 Defense Looks to Bounce Back After Tennessee Loss

The heartbreaking loss to Tennessee was not easy on Gator fans, coaches, or the players themselves. The 11-year win streak over the Vols was suddenly snapped. However, time machines don’t exist and the team can’t go back and change what they did. What this Gator team is now doing is studying what they did wrong, and preparing for another trip to the state of Tennessee, this time to the Music City to face Vanderbilt.

As soon as the Gators got on the plane to return to Gainesville they were watching film on their iPads and learning about what they did wrong. Senior safety Marcus Maye says that the second half of the game was humbling, because once the Vols started to wake up the Gators didn’t respond. However, the Florida defense doesn’t want to repeat those mistakes. The Florida defense, arguably one of the best in the nation, did not meet expectations and they are now taking that responsibility. It might have been a case of the team celebrating too early, as they went into halftime with a 21-0 lead over the Vols. From that point on, they struggled to communicate and weren’t able to finish out the game losing 38-28.

For their next game, the Gators know they can’t take Vanderbilt lightly. At practice this week they’ve been acknowledging the mistakes they made last year-where they escaped with a 9-7 win over the Commodores-but are trying to focus on putting together a more complete performance this time around. The defense looks to bounce back and show the world that they are the highly-touted defense they believe to be.

The Florida Gators face the Vanderbilt Commodores at noon in Nashville this Saturday on the SEC Network.