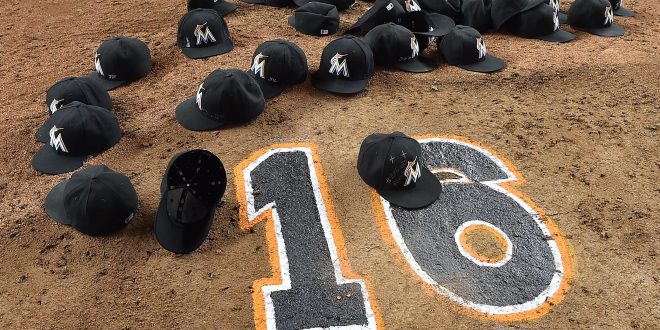 Emotions ran high for the Miami Marlins Monday night, and for this circumstance, crying in baseball was completely okay. The Marlins honored 24-year-old pitcher Jose Fernandez just one day after his tragic passing due to a boating accident. The Marlins held a special ceremony before the game and wore Fernandez’s name and No. 16 on the back of all their jerseys, but they wore their emotions on their sleeves.

No. 16 forever and always. #JDF16 pic.twitter.com/DAgibNZ1se

It was Dee Gordon though who honored Fernandez in unbelievable fashion. In the bottom of the first, Gordon took the first pitch right-handed while wearing the late pitchers helmet, but what Gordon would do next will go down in Marlins history. Gordon turned on a pitch from Bartolo Colon and smacked it over the right field wall for his first home run of the season. As Gordon was rounding the bases the emotions ran high and he started crying around the base path. As he reached home he pointed up to the sky and then embraced all of his teammates in the dugout. Gordon felt that was the best way he could’ve honored his friend and teammate.

The Marlins would total 14 hits on the night and score seven runs in the first three innings to take down the division rival New York Mets. Gordon finished the night with four hits, Justin Bour hit his first career triple, and starting pitcher Adam Conley tossed three shutout innings in his first appearances since having finger tendinitis that sidelined him back on August 13. Manager Don Mattingly says the team wanted to honor Jose by playing with joy and high energy just like Fernandez did.

An hour after the game ended the players gathered around the mound again to remember their friend and teammate one last time. The Marlins and Mets continue their series tonight from Marlins Park. Tom Koehler (9-12, 4.02 ERA) takes the mound for the fish and will go up against New York ace Noah Syndergaard (13-9, 2.63 ERA). First pitch is scheduled for 7:10 p.m.

Im a senior at the University of Florida currently pursuing a degree in Telecommunications. I work for ESPN Gainesville 95.3 and anchor the Monday sports broadcast for WUFT First At Five. Im from New York and an avid sports fan of all New York teams.
Previous New Faces Ready to Lead Orlando Magic
Next Falcons Fly Forward in Win Over Saints