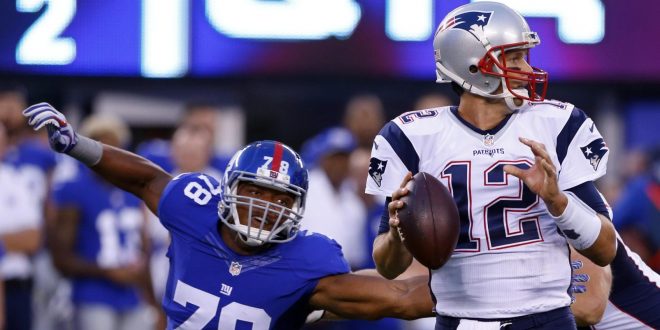 The Return of Tom Brady

NFL icon Tom Brady will make his return to the New England Patriots this Sunday after serving a four-game suspension for his alleged involvement in ball tampering for the 2015 AFC Championship Game against the Indianapolis Colts. The event now known as “Deflategate” shadowed over the Patriots’ season even after their Super Bowl XLIX victory over the Seattle Seahawks. Looking towards the future, Brady looks forward to playing Sunday against the Cleveland Browns (0-4).

After throwing for 58,028 yards and 428 TD’s in his career, Brady comes in as the fifth and fourth all-time in these respective categories. Brady has led New England to a 172-51 overall record and four Super Bowl titles.  With the return of Brady, New England receives a huge boost in confidence on their journey to what they hope will be another Super Bowl appearance.

The Patriots (3-1) are coming off of a historic loss to the Buffalo Bills. Last weekend, the Bills became the first team to shut out the Patriots at home since 1993. They were also the first team ever to shut them out at Gillette Stadium. During the game, the Patriots only managed to gain 277 yards and turned the ball over once.  They were unable to keep their offense on the field as the Bills dominated time of possession.  The hope in New England is that this will drastically improve with Brady at the helm.

“We have to turn the page here. I think we’re a better team than we showed.”

Knocking Off the Rust

Brady will anxiously return to the practice field this Wednesday for the first time in four weeks. After being out of commission, the Patriots QB will work hard this week to get back to playing condition. Will he provide a spark for the Patriots, getting them back on the track against the Cleveland Browns? That question will be answered this Sunday in Cleveland.