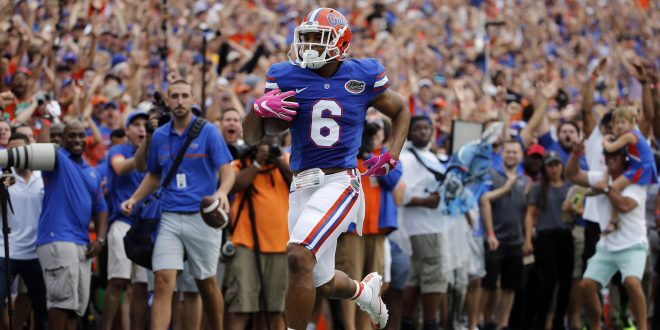 Coming into the Florida-Missouri game, there was one big question: would the Gators’ elite defense shut down one of the SEC’s best quarterbacks? Three hours and 31 minutes later, with the scoreboard flashing 40-14 in favor of the Orange and Blue, everyone had their answer.

Florida’s secondary, led by defensive backs Jalen “Teez” Tabor and Quincy Wilson, limited Tiger quarterback Drew Lock to 39 passing yards, a career low for any game in which he had at least 10 attempts. The sophomore finished 4-for-19 with no touchdowns and two interceptions. Florida head coach Jim McElwain says the defense successfully carried out their plan of preventing Lock from ever really planting his feet.

The shutdown of Lock, while not unexpected given that Florida led the SEC in total defense (130 yards per game) and scoring defense (11 points per game), was still surprising considering Lock’s gaudy numbers. He came into the game with the most passing yards in the SEC (1,675) and second in touchdowns (14).

In the first half, with the Florida offense off to a sluggish start, Tabor and Wilson breathed life into Ben Hill Griffin Stadium with back-to-back pick sixes. The first, a 39-yard return by Tabor, came immediately after Gator quarterback Luke Del Rio got picked by Missouri’s Aarion Penton with less than four minutes left in the first half. But as quickly as the Tigers earned that momentum, it swung back around after Tabor’s play. The six-foot junior said coming into the game he wanted to be the difference maker.

Wilson said the dynamic he and Tabor have lets them thrive off each other, pushing one another to be better than they were even a game before. Wilson accepted the gauntlet Tabor threw down, picking Lock for a 78-yard interception and giving Florida a 20-0 lead, deflating Missouri as the half came to a close. The two create headaches for opposing offenses and McElwain equates it to picking your poison.

The defense as a whole wreaked havoc on the Tigers offense. The pressure they put on the opposing receivers left Missouri with nine three-and-outs on the game. They were also 4-for-14 in third-down conversions. In fact, the two pick sixes racked up more yards (117) than passing yards for Missouri (93). McElwain was proud of his team, mentioning that all the great teams find ways to score on defense.

Though the box score says Missouri had 363 yards, much of that came in the fourth quarter where the Gators subbed in back up players for nearly the entire quarter. Through three quarters, the Tigers had only mustered 145 total net yards.

A dark cloud hung around the defense despite their strong play. Early in the third quarter linebacker Jarrad Davis suffered a left foot injury. He led the team with eight tackles at the time. McElwain says x-rays revealed no break, but they’re awaiting for further information from the MRI.

The Gators head into their bye week atop the SEC East thanks to a Tennessee loss. Afterwards, they’re in Jacksonville for the annual Florida-Georgia game on Oct. 29.