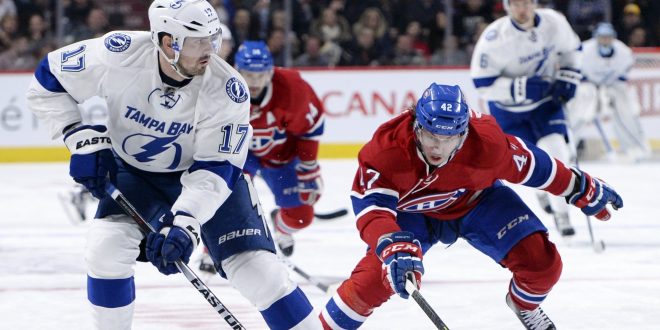 The Tampa Bay Lightning (5-1-0) will travel to Montreal today to take on the Canadiens (6-0-1) in an early-season battle between division rivals. Both teams are coming off of wins after the Lightning thrashed the Toronto Maple Leafs 7-3 Tuesday night, and the Canadiens defeated the New York Islanders 3-2 on Wednesday.

The race for No. 1 in both the division and the conference is on the line when the two face-off. Every point counts, even this early in the season, and this win could be the difference in who sits alone on top.

The Lightning are on their third game of a six-game road trip through Canada and New York. Already having dispatched the Maple Leafs and the Senators, this will be their last game north of the border.

While Tampa Bay has been using a two-goaltender approach to begin the season, Ben Bishop is expected to get his second straight start. All-time against Montreal, he has a 10-3-3 record with a 1.80 GAA and a .932 save percentage.

Montreal is coming into this game as the winner of five straight, but also unrested after just playing the previous night.

Goalie Al Montoya got the start against the Islanders which means that Carey Price starts against Tampa Bay. While widely regarded as the best netminder in the league, Price has had trouble in the past against the Lightning, sporting a 10-11-5 record in 26 games against. He has a 2.53 GAA and .916 save percentage in those games.

The 2020 Stanley Cup Finals have been very eventful, and it could end tonight with …