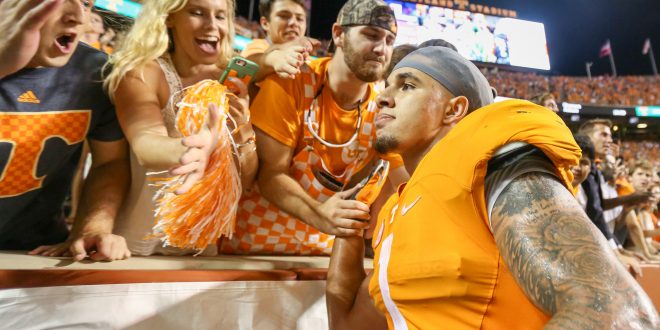 Jalen Hurd to Transfer From Tennessee

Tennessee has not won a football game since they defeated Georgia in a last second Hail Mary exactly one month ago. The Volunteers have lost three straight including a road loss to Will Muschamp and South Carolina 24-21 last week. Tennessee now sits at 2-3 in conference play and by no means control their own destiny.

Now they’re losing more than football games, they’re losing players. Running back Jalen Hurd informed Butch Jones and the rest of his team that he plans on transferring from Knoxville and will no longer be with the team.

“Jalen has informed me that he intends to transfer. I support him on that.”

Hurd may have dealt with injuries all this season, but No. 1 for Tennessee produced more than 1,200 yards on the ground last year. This year he amassed 451 yards and three touchdowns. Hurd has not indicated where he could land next but did say that he has interest in potentially moving to tight end or wide receiver at his next stop. In replacement for Hurd will be John Kelly who ran for 94 yards on 14 carries this past week.

The Volunteers try to salvage the season this week when they host Tennessee Tech Saturday at 4 p.m.

Previous Preview: Gators to Face Georgia and Mississippi State on the Road
Next Jimbo Fisher Not Backing Off Ripping Referees