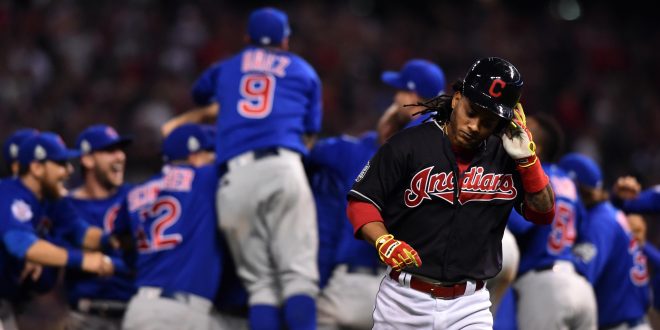 The Cleveland Indians haven’t won the World Series since 1948 and they’ll have to wait at least another year.

The Indians fell to the Cubs 8-7 in Game 7 of the World Series last night. It took 10 innings and a rain delay for the Cubs to make it official.

What Could Have Been

This summer, Lebron James and the Cleveland Cavaliers gave their city the first championship title since the Browns won the NFL title in 1964. So when the Indians clinched their division and made it into the playoffs, it seemed like fate. And with the American League winning the 2016 All Star game, the Indians would have home field advantage if they made it to the World Series.

And when they took a 3-1 series lead in Chicago, most thought the World Series was over. Even though the Cubs had the best record in the regular season (103-58), it looked like the Indians would continue the winning streak for Cleveland and win the World Series for the first time since 1948.

But the Cubs weren’t done yet. Chicago rallied back with a 3-2 victory in Chicago in Game 5, and then a 9-3 win in Cleveland in Game 6. The Cubs had found a way to come back, tie the series 3-3, and force a Game 7. After this, people stopped comparing the Indians to the Cavs and started comparing them to the Golden State Warriors. The Warriors had also given up a 3-1 series lead, which allowed the Cavaliers to win the NBA Finals.

No team wants to be up 3-1 in a series and be forced into a Game 7, but at least for Cleveland, the game would be played at home. The Cubs struck first, with Dexter Fowler homering in the top of the first, making it 1-0 Cubs. The Indians evened the score in the bottom of the third making it 1-1, but the Cubs made it a two run lead in the next inning. The Indians were playing catch up.

And then came the bottom of the eighth inning. The Cubs led 6-3 and it looked like the game might be over. Cubs manager Joe Maddon relieved pitcher Jon Lester and put in closer Aroldis Chapman. Chapman had thrown 42 pitches in Game 5 on Sunday and 20 pitches in Game 6 on Tuesday night. His fatigue showed. The Indians took advantage and scored three runs, which included a two run homer by Rajai Davis, to tie the game 6-6. Fans at Progressive Field were on their feet again and hope was restored. Davis said the feeling of tying the game was incredible.

The game would eventually go into extra innings. Before the 10th could start though, a 17-minute rain delay gave both teams a chance to rest. Unfortunately for the Indians, the delay seemed to work in the Cubs favor. Kyle Schwarber singled and left the game for a pinch runner.  Anthony Rizzo was intentionally walked, and Ben Zobrist hit a double to score a run and Miguel Montero singled in another to give the Cubs an 8-6 lead.

Cleveland scored one more run off a hit by Davis in the bottom of the 10th, but it wasn’t enough. The Cubs won the World Series for the first time in 108 years, with a final score of 8-7.

Indians manager Terry Francona praised the pitching staff, saying they wouldn’t have gotten this far without them.

The Indians will just have to try again next year.

Telecommunications production major. Born in Daytona Beach, FL with a huge passion for sports, particularly the NHL. Is it hockey season yet?
@kayleakonoval
Previous A Gator Grad and a Gainesville Native Star in World Series Finale
Next The End of the Drought and the Beginning of a New Era: The Chicago Cubs are World Series Champions