Home / Feature Sports News / The End of the Drought and the Beginning of a New Era: The Chicago Cubs are World Series Champions 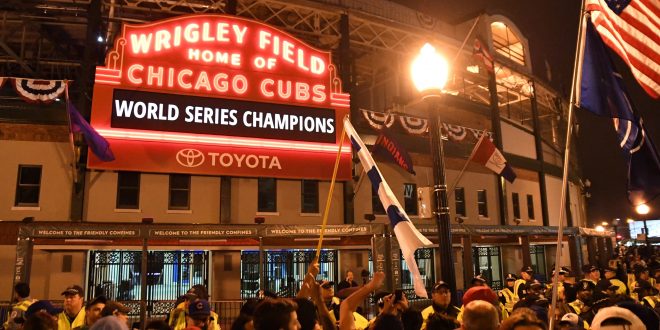 The End of the Drought and the Beginning of a New Era: The Chicago Cubs are World Series Champions

Michael Martinez grounded it to third where Kris Bryant gloved it, threw it to Anthony Rizzo, and the game was over. That was the play that ended it all, and the Chicago Cubs were World Series Champions for the first time in 108 years.

Not even the curse of the billy goat could stop this team from making history. They won 103 regular season games, defeated the Giants, Dodgers, and finally the Indians, and ended a championship drought that had lasted over than a century.

For Chicago fans, nothing could have tasted sweeter than this victory. Grandfathers wept as they finally saw their Cubs win it all; a feat that seemed destined never to happen. And now, according to Cubs manager Joe Maddon, this victory allows the team to move forward.

The Indians almost brought the game back, erasing a 5-1 deficit and pushing the game to extra innings. A rain delay occurred just before the start of the 10th, and provided an opportunity for Chicago to gather for a team meeting and collect themselves. Outfielder Jason Heyward called the players into the weight room to rally together and go into the next inning believing they would win.

“I think the rain delay was the best thing that ever happened to us, to be honest,” said Jed Hoyer, General Manager of the Cubs.

But it was second baseman Ben Zobrist, winner of his second straight World Series, who put the Cubs up in the 10th inning to take the lead again. He hit a double into left field, running Albert Almora Jr. in and setting up Rizzo to score off of Miguel Montero’s single. That hit built upon Zobrist’s consistency that earned him the honor of Most Valuable Player. Maddon couldn’t praise him enough and the example that he sets.

The Cubs are World Champs and now they have an entire off-season to figure out how to do it again.