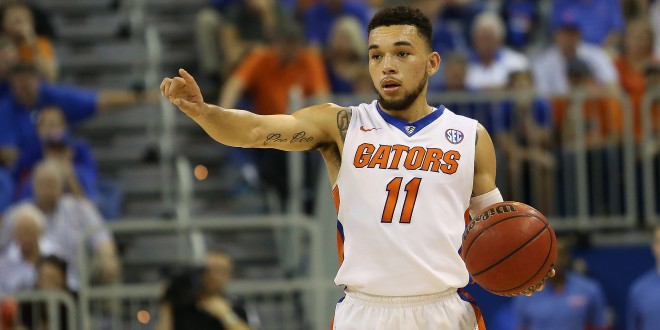 Thursday’s Gator basketball practice included an open session for media and a scrimmage to end the day. Scouts were in attendance for NBA teams like the Detroit Pistons, Indiana Pacers and Golden State Warriors. Below are some thoughts from Thursday’s practice.

Kasey Hill warming up before the scrimmage. pic.twitter.com/Jm1VOmOJEW

Mike White has always touted his team as extremely well conditioned, and plays an up-tempo style on the court to back it up. Today’s practice was no different with the under-performing players of each drill running 22s after every downfall. A “22” is when a player, or players, have 22 seconds to run from one side of the baseline and back two times. If the players fail, they run it again. Coach White also mentioned that his team will feature a rotating starting five, with no players starts guaranteed.

Canyon Barry’s one-on-one moves were impressive and just another reason he’s one of the main scoring threats on this Florida basketball team. His spin moves on the baseline and crisp passes while driving were one of the highlights of today’s practice. After practice, Coach White preached about Barry’s leadership skills.

Oh, you know, just @cbarry719 knocking it down underhanded from half court. pic.twitter.com/7bnldPjcKc

At least from today’s scrimmage, Chris Chiozza seems to be the Gators’ best three-point shooting point guard. His extended range from beyond the arc makes him a real threat to opposing teams, and caused trouble today against his own teammates in practice.

Florida ran a lot of full-court drills today, but when they worked on the half-court offense, they were spectacular as a unit. The balled flowed freely along the perimeter and usually led to an open three, or an easy layup from a man cutting down the baselines. If the Gators can move as well without the ball as they did today, they’ll have a lot of success against high-paced, SEC offenses.

Egbunu’s post-moves were impressive today with how much space he was able to create on his hook shots and interior baskets. While John did a good job shooting the ball, something he needs to improve is his vision. A couple of times during the scrimmage, Egbunu would have a man wide open in the corner, but be solely focused on the paint. If Egbunu can do what his predecessors, Will Yeguete and Patric Young did, and become a better post passer, the offense can move a lot more fluid than it does at the moment.

Kevarrius Hayes showed nothing but effort and grit at today’s practice, and when not in the air jumping for a rebound, could be found on the floor scrambling for a loose ball. I see Hayes becoming a leader of this team by the end of this year, or the start of next season.

Keith Stone has been Mr. Everything with the Gators so far. His main contributions in the Eckerd game ended up coming on the boards. Coach White praised Stone after Thursday’s practice, and compared his offensive skill set to that of Dorian Finney-Smith’s.

Hudson is one of the more polished players on this Gator basketball team, but he unfortunately won’t be available until the 2017-2018 season due to NCAA transfer rules. The combo guard, previously from VT, didn’t have a stutter in his game. His motions were fluid and his basketball awareness keen. Hudson will be a nice contributor for Florida, but Gator fans will have to wait a full calendar year.

Rimmer once again showed the full effort that he does when he plays in live game action, but couldn’t produce results. Schuyler constantly found himself in position for the rebound, but had a real hard time finishing the lay-up or tip-in that followed. Rimmer is certainly another big body to have on the team, which is always helpful in the frontcourt, but his production has to increase.

Hester missed practice, but the team says it was only due to an illness, and he should be back quickly. The UF plague comes and goes through Gainesville often, and Hester just happened to be its latest victim.

“1-2” was the story of the 2015-2016 season, and the story of the end of Thursday’s practice. The final drill of the scrimmage required players to shoot two free throws with their teammates standing along the baseline. Whenever they missed, the whole team ran 22s. Essentially, the team ran a lot of 22s. With the threat of “88s” looming on Kasey Hill’s free throws to end practice, the veteran guard knocked down both to give his team a well-deserved rest after a long day’s practice.