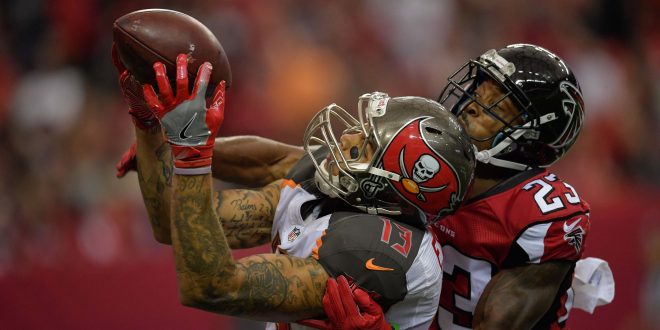 Ever since the Falcons lost 31-24 Week 1 to the Buccaneers, they’ve been looking forward to the rematch which takes place tonight from Raymond James Stadium. The Falcons have built their way up since then, and are now 5-3 while the Buccaneers are 3-4.

Since the last time Atlanta faced Tampa Bay, there have been some big changes. Not to mention, players have been getting hurt for both teams. Julio Jones has been serving the Falcons well this year, however he has not been able to play to his full potential due to a knee injury. Jones is still expected to play tonight.

The Buccaneers lineup has had some major changes as well since then. During the Week 1 game, the tight end for the Buccaneers was Austin Seferian-Jenkins , who caught a 30 yard touchdown on that day. Since then, however, he was charged with a DUI and was consequently waived from the team. Two of the Buccaneers running backs, Doug Martin and Charles Sims , have also been injured along with receiver Vincent Jackson.

The Buccaneers are coming off an overtime loss at home against the Raiders their last time out, but are ready to fight. Quarterback Jameis Winston  spoke about what aspects of this game will make them play better.

Will Jameis Winston Get Back on His Game?

At times this season, Winston has looked like the quarterback Tampa Bay thought they were drafting in the first round. Other times, however, he has struggled mightily.

Winston’s struggles often stem from the protection he receives, or lack thereof. Winston has taken more hits than any other quarterback per game this season. Whether this has been caused by holding on to the ball too long, not picking up blitzes, Winston not finding open receivers or just poor line play, something has got to change.

Winston does inherently struggle with straight drop backs. His rating for this is the second-worst in the NFL. On the bright side for the Bucs, Winston has the best rating for QB’s on play action passes.

Will Matt Ryan Lead the Falcons to Success?

One of Atlanta’s best attributes is their quarterback, Matt Ryan. Ryan currently leads the NFL in touchdown passes with 19. Ryan’s arm is definitely one of the Falcon’s keys to winning, with Ryan having 2,636 passing yards. In Atlanta’s nail-biting win over Green Bay last week, by a final score of 33-32, Ryan quite literally led the team to success with a last minute game-winning throw.

Although the Falcons are coming off of an exciting win, Ryan is not overly confident about this game. He says that their offensive line still needs to improve.

After tonight’s game both teams will be able to relax with a 10 day break. The Falcons will next play Philadelphia, while the Buccaneers will take on the Bears on November 13th.