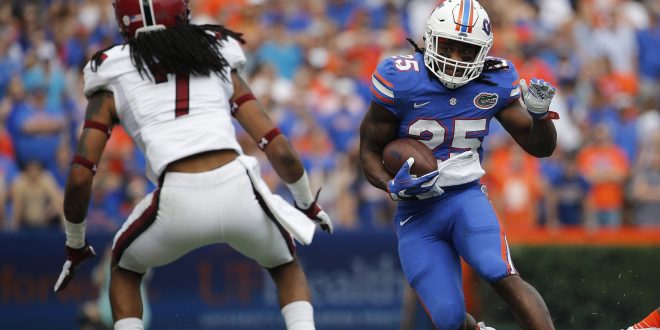 Gator Football Bounces Back in Win Over South Carolina

The Florida Gators (7-2) are still alive in the chase for the SEC East, spoiling former Gator coach Will Muschamp’s return to The Swamp in a 20-7 win over South Carolina (5-5) on Saturday in Gainesville. Florida head coach Jim McElwain gave the Gamecocks credit, saying that South Carolina fought hard for their coach.

Florida’s offense relied heavily on tailback Jordan Scarlett, who rushed for 134 yards on 20 carries. Scarlett says it felt great to have his coaches show trust in him. He credited his offensive line for his performance.

Gator quarterback Austin Appleby threw for 201 yards, with two touchdowns and one interception. Despite two turnovers, McElwain says Appleby did well, but his receivers need to limit drops. 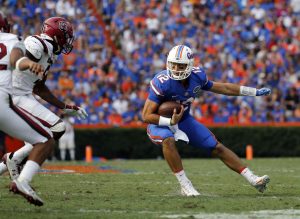 Appleby went to work early for Florida, and the Gators only needed four plays to score on their opening drive. Appleby had a 33-yard scramble that set up his first touchdown pass, a six yard toss to C’yontai Lewis. The 56-yard drive marked the second opening-drive touchdown that Florida’s scored all season. Appleby was at the helm for both of them—the first one coming against Tennessee.

Florida’s defense held strong to keep the lead, and the Gator offense looked promising on their second drive. The Gators went marching 33 yards in five plays before tailback Mark Thompson fumbled on the Gamecock 24-yard line.

Thompson didn’t see the field again after coughing up the turnover.

South Carolina punted for their third straight drive, and the Gators hustled 88 yards downfield before Appleby mishandled a snap from under center. The fumble gave South Carolina possession on their own 14-yard line. The Gamecocks managed an 18-yard drive before their fourth consecutive punt.

Florida’s offense quickly covered 76 yards to make it 14-0, capped off by Appleby’s perfectly-placed 18-yard scoring strike to senior Ahmad Fulwood. The offensive production was exactly what Florida needed following two drive-ending turnovers. McElwain says he was proud of Fulwood for going up and getting a rebound on a high ball.

South Carolina’s offense responded to the touchdown with their second-longest drive of the day, going 38 yards in 10 plays before Taven Bryan forced a turnover with a strip-sack on Gamecock quarterback Jake Bentley. Neither team was able to score heading into halftime, and Appleby threw his only interception to T.J. Holloman at the end of the second quarter.

Florida’s offense opened up the second half with a three-and-out, but their next two drives saw Eddy Pineiro field goals from 54 and 36 yards out to extend their lead to 20-0.

Despite facing a banged-up Gator defense, the Gamecocks couldn’t get anything going offensively to start their second half. 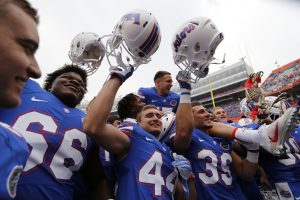 South Carolina’s first three drives of the third quarter ended with two punts and an interception. After sniffing out a reverse and making a tackle for a loss, Gator defensive back Marcell Harris read a receiver’s route perfectly to snag Florida’s second takeaway. McElwain says the Harris pick was due to Florida’s defensive pressure on Bentley.

With time ticking away, South Carolina managed an 80-yard drive to bring the final score to 20-7. Tailback David Williams punched in South Carolina’s only score from one yard out.

On the injury front, Gator safety Marcus Maye will miss the remainder of the season with a broken arm, while defensive lineman Bryan Cox Jr. left the game and did not return. Surprisingly, Florida’s offense didn’t seem to miss a beat after losing backup center Tyler Jordan, who was then replaced by redshirt freshman T.J. McCoy.

Looking forward, McElwain says Florida has a long way to go as they prepare for next week’s road game against LSU.