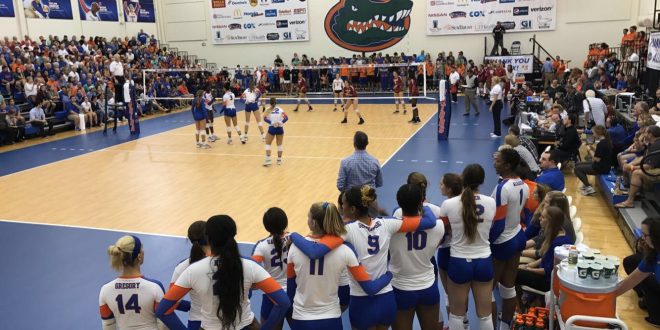 The sixth ranked Florida volleyball team continues to dominate after defeating the Alabama Crimson Tide in yet another sweep at home Sunday.  It was also a celebration for Florida’s lone senior Alex Holston.  Holston, a three time All-American, was celebrated by her teammates, family, and head coach Mary Wise.  Wise sang her praises as an well-rounded player who is still playing her best.

Offensively, the dynamic trio of Holston, Rhamat Alhassan, and Carli Snyder combined for 33 kills.  Red shirt sophomore Allie Monserez had 11 digs and 35 assists for her fifth double-double of the season.

However, defense was the name of the game for the Gators on Sunday.  Florida held Alabama’s Krystal Rivers, the SEC’s leader in kills per set (5.85), to just seven kills and a .000 clip.  Not only did the Gator attack stifle their best player, they held the entire Crimson Tide squad to a .000 hitting percentage.

Overall, the first match saw some back-and-forth competition with the Gators and the Tide remaining within two points of each other the entirety of the match.  It wasn’t until freshman Chanelle Hargreaves dominated the service line with three straight points that Florida took advantage of the run and outscored Alabama 25-18 in Set 1.  In Set 2, the Gators forced a series of long rallied points but ultimately held on to win six of the last eight points to win 25-16.  After the short break, Florida returned to the court rejuvenated and finished the match 25-12.

With Sunday’s win, the Gators are up to 12 straight wins and eight straight sweeps.  This is also the eighth game in a row that the team has hit over .350.  The last Gator volleyball team to hit this well for eight straight was the 2003 team, which made it to the NCAA Final Four.

Florida adds two SEC wins to the tally after this weekend and remains atop the SEC standings by a half-game.  Sitting just below the Gators in the rankings are the Missouri Tigers.  Thankfully, Florida gets a well-deserved week of rest before taking on Mizzou next Sunday for a decisive SEC match up.

Kentucky Goes Up Against Missouri in Week 5 SEC Football Action

After a convincing victory over the then 18th-ranked Tennessee Volunteers last week, the Kentucky Wildcats …