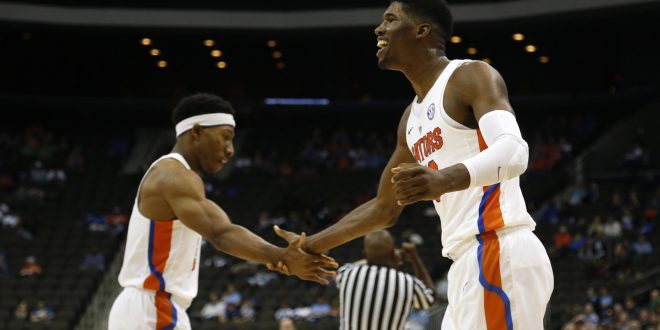 Most people will remember Mercer for their 2014 NCAA Tournament run. The Bears qualified for their third big dance that year, and took down the No. 2 seed Duke Blue Devils to pick up their first ever win in the tournament. Tonight, Mercer takes on the Florida Gators at 8 p.m. at Jacksonville Veterans Memorial Arena, as UF looks to pick up their second win of the season. The Bears won their first game of the season against Brewton-Parker College (NAIA), 87-53.

Florida and Mercer have met three times in school history, but the last match-up came in 1979. The Gators lost that game, 69-67, but are 2-1 in the all-time series.

Pace of play was Mercer’s biggest advantage against Brewton-Parker College in their season opener. The Bears ended the game on a 28-0 run to win the game. The Gators will have to watch out for Ria’n Holland who scored a team-leading 24 points against BPC. Holland is a redshirt junior who transferred from Wichita State, but originally started at Indian Hills Community College.

While Mercer pulled off the win vs. BPC, their offense was wildly inconsistent. The Bears shot 53.1% from the field, 38.5% from beyond the arc and a poor 69.2% from the free throw line. Of Mercer’s 87 points, Ria’n Holland, Demetre Rivers and Stephon Jelks accounted for 52 of them. If the Gators can shut down the combo of Holland, Rivers and Jelks, the Bears offense could be quite stagnant. No other player scored more than eight points against BPC.

Mercer’s defense held BPC scoreless in the last 12 minutes and 25 seconds of the game, making 22 consecutive defensive stops. The Bears held BPC to 31.3% shooting from the field, and an abysmal 26.5% from downtown. Since the Gators have had trouble from three-point land dating back to last season, their strategy will more than likely be to penetrate the paint, an area they held a 20-point advantage in during their last game vs. FGCU.

Florida showed their ability to control the pace of the game in their 80-59 victory over Florida Gulf Coast on Friday night. The Gators outscored the Eagles in the paint, 46-26, and were able to dominate FGCU in the half-court. On the flip side, UF’s 19 forced turnovers turned into 24 points, and were part of the reason they were able to close the game on an 18-5 run to win the game.

Canyon Barry was the team’s second-leading scorer against FGCU. Barry contributed 13 points on 5-12 shooting and grabbed six rebounds. The son of NCAA and NBA legend Rick Barry will need to improve his free throw shooting tonight, as he went 1-4 on Friday night. After the game, Canyon called it one of the worst performances from the charity stripe that he could remember.

The Gators picked up where they did last season and shot 4-15 (27%) from beyond the arc. If Florida wants to beat Mercer, their offense has to focus on the interior, not three-pointers.

Tonight’s game is being broadcast on ESPNU, with Mike Morgan and Miles Simon on the call. You can listen to the game, as always, on the Gator IMG Sports Network.

We're back on the court tonight. #GoGators pic.twitter.com/0YFVUbTVnb