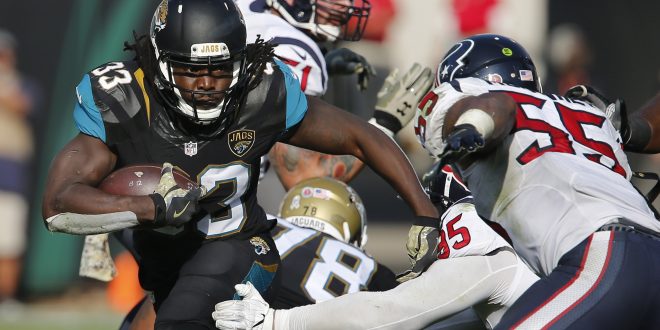 Jaguars Fall Short Against the Texans

The Jacksonville Jaguars have dropped to 2-7 after losing to the Houston Texans Sunday. The Jaguars tried to make a comeback with a 14-yard touchdown pass from Blake Bortles to Allen Robinson and a successful two-point conversion, but the Jaguars fell short by three points. The Texans beat the Jaguars 24- 21. This is the Jaguars fourth straight loss and fell to 0-4 at home.

The Jaguars have extended the NFL’s longest current touchdown drought to open games by failing to score a touchdown on their opening possession. Jacksonville’s streak is now at 23 games after Bortles’ interception. He has also threw opening drive picks against Green Bay and Chicago.  Despite this struggle, Jaguars quarterback, Blake Bortles says that as a team they are a work in progress and need to work together to make better plays.  Bortles also knows that no matter what, all that matters is what the team does on the field and they need to focus on going out there and putting their best foot forward.<

Same old, same old for the Jaguars: They turn the ball over, can't force a turnover, and… https://t.co/LhdM5yWcKg pic.twitter.com/UMmN19kDXh

Jaguars head coach Gus Bradley, says that even though his team needs to work together to get better, he still believes in his their talents and abilities.

The Jaguars will be on the road to face off against the Detroit Lions at Ford Field next Sunday.