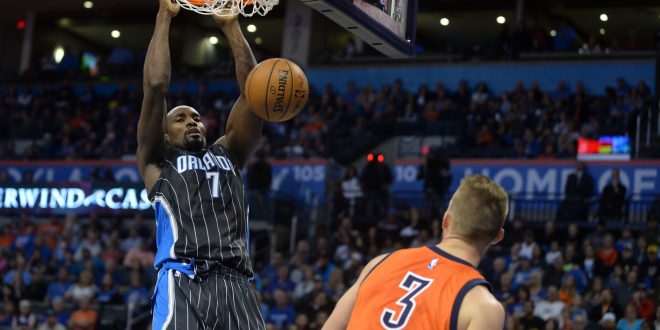 Sunday night,  the Orlando Magic(4-6) took on the Oklahoma City Thunder(6-4) at the Chesapeake Energy Arena cool off of a three-game losing streak.

It was a win the Magic needed for morale, and a win Serge Ibaka needed for revenge. The defender from Congo spent seven years with the Thunder from 2009-2016, before being traded to the Magic in exchange for Ersan Ilyasova, Victor Oladipo and the draft rights to rookie forward Domantas Sabonis.

And boy, did Ibaka get his revenge. The Thunder entered the game with one of the most competitive defenses in the league. That didn’t stop Ibaka from scoring a career high of 31 points(his first 30-pt NBA game). He also racked up nine rebounds and four blocks. Elfrid Payton also put up 23 points, Evan Fournier with 21, and Aaron Gordon and DJ Augustin with 12 each. Of course, the Thunder fired back most notably with Russell Westbrook’s 41 points.

The teams had 117 points apiece when Magic coach Frank Vogel called a timeout with 11 seconds left. He then set up a game-winning play that allowed Ibaka to get a nine-foot baseline jumper past Steven Adams with two seconds remaining. Ibaka made the Thunder realize what they gave up. Simultaneously,  he also redeemed himself to Magic fans for his spotty start-of-season performance.

Serge Ibaka for the @OrlandoMagic win in OKC! #LetsGoMagic pic.twitter.com/hSfMFrQoF3

Monday the Magic will travel to Indianapolis to face the Pacers, who are standing with a 4-6 record. If Sunday wasn’t dramatic enough for the Magic with Serge Ibaka, Monday Marks Frank Vogel’s return.  Monday will be the first game Frank Vogel coaches at Bankers Life Fieldhouse since the Pacers decided not to renew his contract after the 2016 Playoffs.