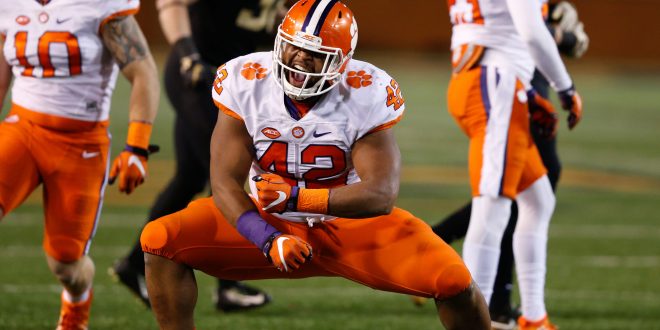 Another in-state rivalry showdown will take place in the Palmetto State. The Clemson Tigers, who are ranked fourth in the college football playoff poll, will host the South Carolina Gamecocks on Saturday night.

This past Saturday, South Carolina became bowl-eligible with their win over Western Carolina 44-31. Clemson, meanwhile, kept their college football playoff dreams alive by defeating Wake Forest 35-13. The Tigers won the last meeting between the two teams, defeating the Gamecocks 37-32. Clemson currently leads the all-time series with a  67–42–4 edge. The Tigers have also won the last two seasons.

The head football coach for the Clemson Tigers, Dabo Swinney,  looks forward to this in-state rivalry game and knows that South Carolina is a team that is getting better every week.

The Tigers have already clinched the Atlantic division title, and will head to the ACC championship. But Clemson has more to lose in this situation, because they are contenders for the playoffs.

However, South Carolina wants the win just as bad. They’ve already defeated the Tennessee Vols, who were ranked 18th at the time, and they’ll have to have the same mentality to taint the Tiger playoff dreams.

In Clemson’s win over Wake Forest, running back Wayne Gallman ran for 161 yards and two touchdowns. Quarterback Deshaun Watson was responsible for three touchdowns. Swinney praised Gallman on his last game for stepping his game up.

Watson this season has thrown a total of 3,279 yards and 28 touchdowns for the Tigers, but he has been picked off 13 times. Gallman, who has rushed 13 touchdowns this season, will be a threat to the Gamecocks Saturday.

On the Gamecocks side, they’ve won four out their last five games since quarterback Jake Bentley got the starting spot. Bentley, a freshman, will need help from his teammates to help take the pressure off. He had some of that help from running back Rico Dowdle last time out, who rushed for 226 yards and added two touchdowns.

On the defensive side, South Carolina needs to contain Watson. Putting pressure on the Tigers is a major key if they hope to upset the playoff hopefuls.

The Clemson Tigers host the South Carolina Gamecocks in Death Valley at 7:30 p.m. on Saturday.