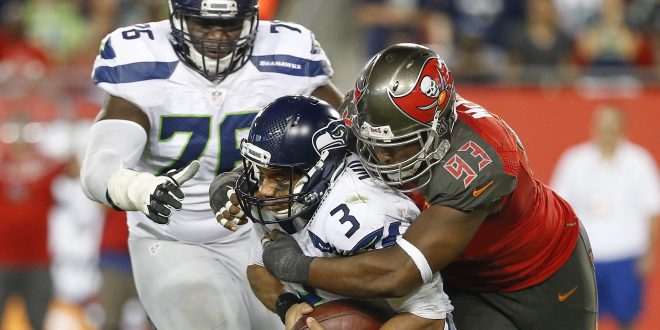 The Tampa Bay Buccaneers have now won three games in a row after defeating the Seattle Seahawks 14-5 Sunday.

The Seahawks were favorites to win, but the Buccaneers came together and dismantled the Seahawks. Head Coach Dirk Cotter mentions how the Bucs overcame adversity to defeat the Seahawks.

James Winston threw for 220 yards and threw two touchdowns against the Seahawks defense. Both of Winston’s TD’s were in the first quarter and went to Mike Evans who also had 104 yards for the game. Evans has now totaled over 1,000 yards for the season for the third consecutive year.

Mike Evans is the 4th player in NFL history with 1,000 receiving yards in each of his 1st 3 seasons pic.twitter.com/TAeHGT0YT4

For Seattle, Russell Wilson was unable to throw for any touchdowns, yet led the team in rushing, carrying the ball eight times for 80 yards. Jimmy Graham led the team in receiving yards, hauling in six catches and totaling 67 yards. Despite this loss for Seattle, they remain first in the NFC West with a 7-3-1 record.

For Tampa Bay, they are second in the NFC South with a 6-5 record, behind the Atlanta Falcons who are 7-4. The Bucs’ next game is in San Diego against the 5-6 Chargers, who are coming off a victory against the Houston Texans.