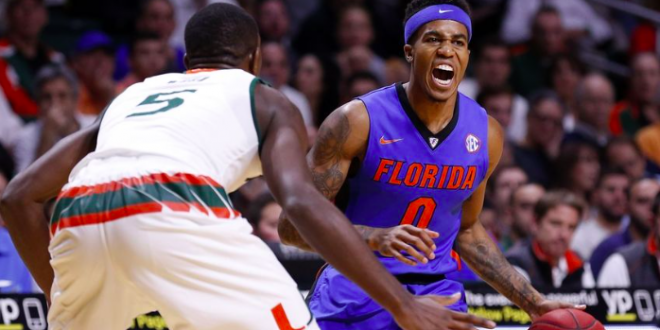 The Florida men’s basketball team was playing for third place in the Advocare Invitational in Orlando against in state rival Miami on Sunday afternoon.  However, to them it was just another very important game against a well coached, tough ACC team.

After a close 77-72 loss to Gonzaga, this game against the Canes was a test to see how well they could bounce back from the loss. The Gators showed that with only a day rest after a challenging tournament they could defeat Miami with a 65-56 win.

Highlights! #Gators take down Miami in Orlando. Check out how we did it. pic.twitter.com/fEvHCgasW6

The Gators really didn’t come out swinging in the first half. Florida coach Mike White benched all five of his starters for lack of effort when they didn’t hustle fast enough to defend an eventual Miami transition layup.

In the second half, the Gator offense struggled at times.  They allowed the Hurricanes to go on a 9-0 run in the first five minutes of the half. However with 14:34 to go redshirt freshman Keith Stone helped the Gators get their first points of the half to put them behind the Canes by three. For the first 7:13 Florida was 0-for-10 from the field. With 9:41 left the Gators took the lead and held onto it to defeat the Canes.

Point guard Kasey Hill led the Gators in points with 16 and added three assists as well. Last season he struggled with free throws but went 8 of 10 from the line Sunday night.

“It felt good to knock those down, I’ve been working on my free throws all summer,” Hill said.

Stone had a breakout game Sunday. Coming into Sunday’s game he only made 2 of his first 15 career shot attempts. Against Miami however he scored 15 points, a career high, and led the Gators in rebounds with eight. He even had two three pointers to help the Gators get their halftime lead.

“I got confidence from my teammates telling me to shoot. They gave me confidence. Even though I was having a bad start they told me, keep going, you’re doing well, we’ve got you and that just helped me out,” Stone said.

White knew that this breakout game would happen soon for Stone and was glad to have another double figure scoring player contribute.

“We knew that at one point he was going to settle in and provide production, earn some more minutes. We just kind of slaw glimpses of what he potentially could be for this team,” White said.

This was a very important win and tournament for the Gators. There were several tough programs at the Advocare Invitational and it was similar to conference and post season play with the lack of rest that come with these games. These games, although very early, stick out to the NCAA selection committee when it’s time to send out invitations for the Big Dance in March.

“It’s an opportunity to simulate a college tournament opportunity for all of us who have aspirations in the potential of playing postseason to earn those type of wins, which put you in the conversation,” White said.

Up next the Gators will have some rest, and will then travel up to Jacksonville to face the UNF Ospreys on Thursday.