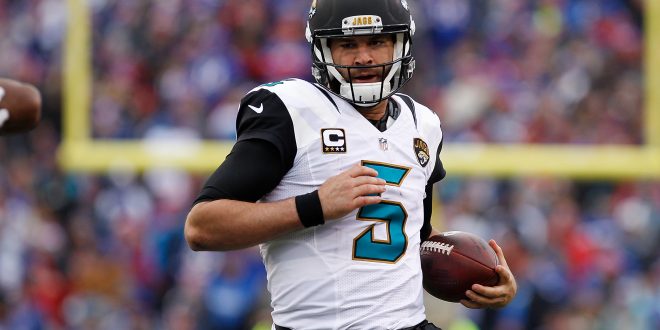 NFL Preview: Jags Look to Get Back on Track Against Broncos

After a season full of failures thus far, the Jacksonville Jaguars will try to put an end to their six-game losing streak when they host the defending Super Bowl Champions, the Denver Broncos, on Sunday at 1 p.m.

Be more careful when you pass it, Blake

On Sunday afternoon, fans at the EverBank Field will witness the No. 8 defense in passes intercepted (10) – the Broncos – against one of the three quarterbacks with more interceptions (13) so far in the season – Blake Bortles.

The 24-year-old quarterback has shown that he can be a threat at his position. He has a great ability to use his mobility and footwork when setting up plays for his teammates. But it will not probably be enough if he has in front of him the leader in total sacks (12.5), Von Miller. The 27-year-old linebacker has shown this season why he was the key man in the defensive wall deployed by the Broncos in the past Super Bowl. Miller seems like he is five seconds ahead of his opponents when he anticipates and dribbles offensive lines to take down the rival quarterback.

The Rookie is Back

After debuting with a win and a loss in his first two NFL games, Paxton Lynch is back on the field after it was confirmed that Trevor Siemian will be out this week because of a foot injury, according to Jeff Legwold, ESPN senior writer.

The 22-year-old quarterback has the chance to keep developing his passing abilities and improving some of the mistakes that he made in his first two games. Lynch is similar to Bortles in terms of using his agility to open spaces for himself and clear his vision to find receptors. One thing that he needs to take care of is his slowness when releasing the ball. The Jaguars secondary team will need to deploy its great ability to defense against the passing – they are the No. 3 best defense in Net Passing Yards Leaders(2,247). That will give the Jaguars a chance to cover the receiving vision of offensive forces like Emmanuel Sanders and Demaryius Thomas.

Injuries continue to hurt the Jaguars

According to the Jaguars injury report, the wide receivers, Rashad Greene and Allen Hurns, will not play against the Broncos on Sunday. Both players have helped the team in what has probably been the only good highlight for them this season—the receiving game. Even tough both players are ruled out, the Jaguars still have the three biggest weapons on their receiving arsenal available: Allen Robinson, Marqise Lee and Julius Thomas. The three of them have 12 touchdowns and 1,453 receiving yards combined so far on the season.

The Jaguars will have to bet their chances on the passing game if they want to create danger despite that the Broncos are a relentless defensive team against the pass. This is mainly because the Jaguars are in the No. 25 and No.31 positions in rushing yards (1,059) and rushing touchdowns (4) respectively. If the Broncos want to keep up their momentum in the battle for the first spot in the AFC West, they will have to take advantage of this and force the Jaguars to rush the ball.