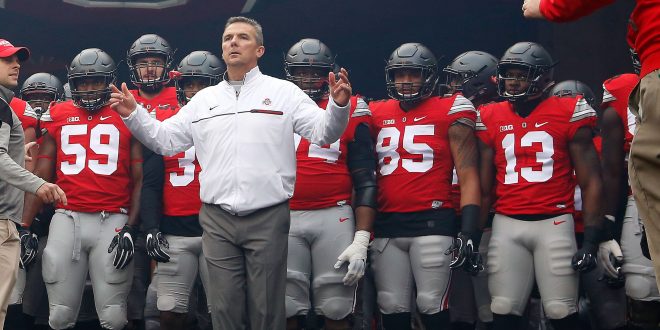 Urban Meyer Back in the College Football Playoff

Two years ago, Ohio State shocked most of the country when they slipped into the inaugural College Football Playoff. But they managed to win their conference with a third-string quarterback and a questionable resume.

Here we are in 2016, and look who is controversially in again. No.3 OSU takes on Clemson, as No.1 Alabama faces No.4 Washington.

The #CFPlayoff committee has spoken. Stayed tuned to ESPN today for the rest of the bowl matchups.

The Buckeyes are arguably the second best team in the country, but if you haven’t heard they did not win the Big Ten Championship, nor did they even play last weekend.

The winner of the Big Ten Championship Game was Penn State, who defeated Wisconsin 38-31 and came back from a 21-point deficit. The Nittany Lions finished 5th in the final College Football Playoff rankings. Nonetheless, Urban Meyer has a shot at his fourth national championship.

The bowl location was supposed to geographically favor the higher seed; Clemson in this case, but does Arizona seem closer to Ohio or South Carolina to you? Just more of that Urban Meyer magic.

Coach Meyer spoke candidly about the opportunity, explaining that he really didn’t know until the logo flashed on ESPN’s selection show.  Last year, Meyer’s team went 10-0 before falling to Michigan State and missing the Playoff ranked seventh. They topped Notre Dame 44-28 to win the Fiesta Bowl and finish the season ranked fourth.

In 2014, Ohio State upset top-ranked Alabama 42-35 in the National Semifinal and took care of second-ranked Oregon 42-20 in the championship.

Quarterback J.T. Barrett finally gets his shot at quarterbacking his team to a ring. In 2014, a Barrett injury prompted Cardale Jones to be the hero. He did have some help by means of Ezekiel Elliot.

Ohio State-Clemson got the night game on Dec.31, with kickoff set for 7 p.m. from Glendale, Arizona at University of Phoenix Stadium.