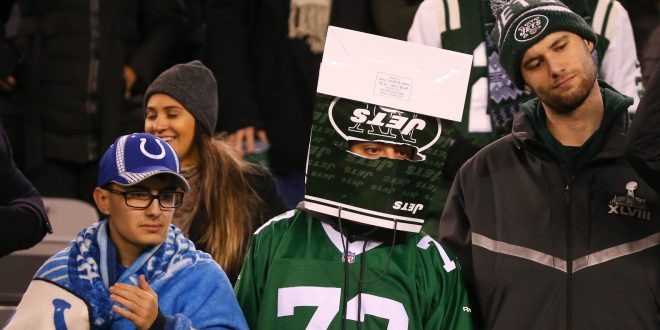 Yet again, prime time Monday Night Football completely embarrassed the New York Jets as the Colts handed down a 41-10 whomping. In the Jets’ Monday night football action so far this season, they have been outscored 13-69.

To no one’s surprise, the Jets are eliminated from the playoffs for the sixth straight year. This year ties the program’s 2nd longest drought in 1992-1997, still shorter than their decade-long streak from ’70-’80.

Jets Attempt to Mix it Up With three interceptions, three personal-foul penalties, dropped passes and so on, the Jets really had nothing to lose by moving some things around.

Head coach Todd Bowles benched starting quarterback Ryan Fitzpatrick, but backup Bryce Petty really didn’t contribute either.  Bowles announced that Petty will be starting over Fitzpatrick for the remaining games this season.  Bowles threatened other starter changes as well.  But ultimately he said it all falls on him, and he is taking full responsibility.  Who knows, maybe owner Woody Johnson will be ready to make some coaching changes himself.

It all falls on the Jets’ effort.  Multiple players, along with Bowles, said they did not show up.  The effort and fire were lacking and never actually had a chance at sparking. After being out from a concussion, Andrew Luck was ready to get back out on the field.  With the Jets’ failing coverage and open receivers all night, Luck was able to ultimately connect.

Luck was 6-6 for 93 yards and two touchdowns on his first two drives of the game.

The Jets’ failing defense sacked Luck once, which doesn’t say a lot considering  he started the week as the most sacked quarterback in the NFL.

Andrew Luck now has as many pass TD tonight as incompletions (4). pic.twitter.com/oUdU2ebGog

With the Colts’ performance and three wins in their past four games. they were able to force a first-place tie for the AFC South.