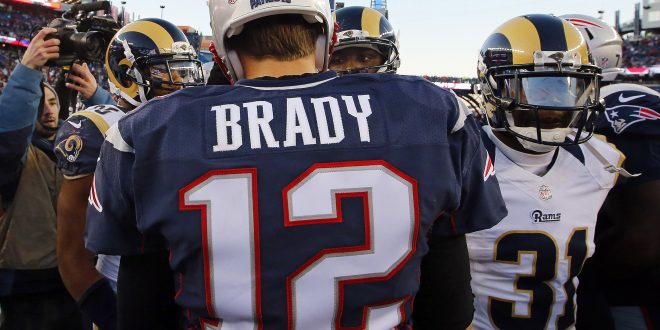 Tom Brady now stands as the all-time winningest quarterback in NFL history, after his 26-10 win over the Los Angeles Rams Sunday. He had tied Peyton Manning’s record last week with his win over the New York Jets. Brady said he was thankful as he remembered his last 201 victories.

Though the score reflects an obvious Patriots offensive victory, their defense showed great effort as well. Rams quarterback Jared Goff was sacked four times by Chris Long and the Patriots, only blitzing a total of seven times. Brady threw for 269 yards and was 33 of 46. His single touchdown pass came in the first quarter, as a 14-yard pass to Chris Hogan. The Patriots(10-2) have now reached at least 10 regular season wins in 14 straight seasons, joining San Francisco as the only teams to accomplish this feat.

And a Legendary Career

Brady is currently in his 17th NFL season. He’s come a long way since 2000 NFL draft, where he was the 199th pick. He now holds 79 regular-season wins and 22 in the playoffs. His 232 games are the most games by any player in the team’s history. The Patriot’s captain was voted MVP for Super Bowls XXXVI, XXXVIII and XLIX. He also holds the NFL record for most passes thrown without an interception(358, 2010-2011). The 39-year-old quarterback has won four of six Super Bowls that he has participated in. Patriots head coach Bill Belichick says Brady is more than deserving to hold this title.

Hopefully for the Patriots, last week’s victory will boost the team’s confidence as they head into a tough contest with Baltimore. The Ravens are first in the AFC South, but stand at just 7-5. Brady and the rest of the Patriots are hoping to dominate this game as the NFL playoffs approach.