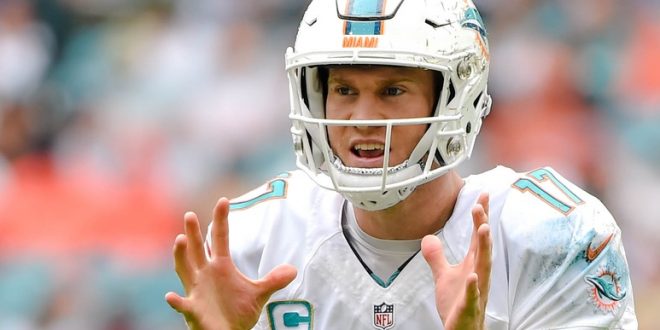 When the  Miami Dolphins partake in their first postseason game since 2008 on Sunday against the Steelers, Ryan Tannehill will not be returning from his knee injury. During Wednesday’s practice, Tannehill sat on the sidelines as quarterback Matt Moore took the first-team snaps.

After practice, Dolphins head coach Adam Gase decided that Tannehill was not ready to play. Matt Moore will most likely take over his position for the fourth game in a row now. If Moore could not play for any reason, T.J. Yates is expected to be his backup.

In the regular season, Moore finished up with a 105.6 passing rate with 8 touchdown passes and received the Offensive Player of the Week Award in his first week playing. Before the injury, Tannehill passed for 2,995 yards completing 67.1 percent of his passes and had 19 touchdowns in only 13 games.

Tannehill not practicing for @MiamiDolphins.

Tannehill’s injury occurred on December 11th in a game against the Cardinals. Tannehilll took a low hit from Cardinals defensive end Calais Campbell, which resulted in a sprained ACL and MCL.

Tannehill Says “No” to Surgery

He chose not to have surgery on his knee during the season, with the hopes that he would be able to get back on the field sooner. Tannehill could play again this season if the Dolphins progress, however it will not be in this game. Coach Adam Gase says that he does not want Tanehill playing until he has fully participated in a practice and drills. As of last week, Tannehill has been throwing on the sidelines at practice; frustrated that he cannot play, but persistent on trying, according to Gase.

“To throw him back there and say, ‘Don’t move, and if anybody gets close to you, go down,’ that’s not really an option for us,” Gase said. “It’s not his style of football. We have to make sure that we feel comfortable with the way that he’s moving around. … I don’t want to jeopardize his career or next season by putting him in a position to where he can’t defend himself.”

Tannehill is expected to participate in the team’s workouts if he does not have knee surgery. Until then, the Dolphins will continue to work together through the playoffs.