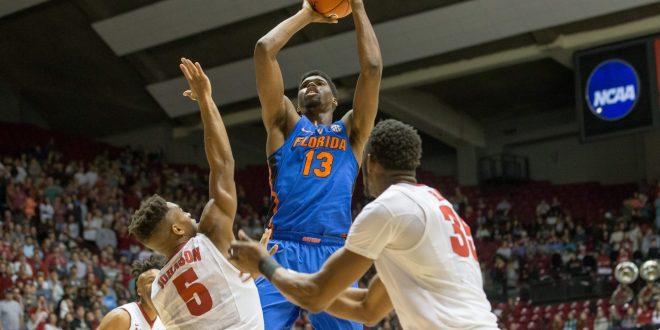 Free throws plagued Mike White and the Florida Gators last season, more than likely costing them a trip to the Big Dance. On Tuesday night in Tuscaloosa, it was Avery Johnson and the Alabama Crimson Tide who had to suffer through the hardships of missed opportunities at the charity stripe. ‘Bama went 16-of-32 (50%) at the line, leading to an 80-67 loss to the Florida Gators at Coleman Coliseum. UF is now 4-0 in SEC play for the first time since the 2013-2014 season and has a 13-3 overall record on the season.

Turnovers and free throws were the Tide’s kryptonite on a night where 18 giveaways led to 27 points for the Gators. Florida’s Canyon Barry (13 points) and Keith Stone (14 points) combined for 27 points in a game where UF’s bench outscored Alabama’s reserves, 41-17. Canyon Barry has now scored at least 13 points off the bench in five of Florida’s last six games. Florida also knocked down 24-32 free throws, shooting 75% at the foul line. UF Head Coach Mike White describes the win as a buy into the culture that has been set and a great showing of how versatile his team’s defense really is. White also raved about Stone’s performance, calling it “the second game where he’s been the best player on the floor.”

Kasey Hill finished with another well-balanced stat line of 13 points, five rebounds, five steals and four assists, only turning the ball over three times in 35 minutes played. Mike White noted that Hill fought through strep throat and even missed practice because of it on Monday. For Alabama, it was Braxton Key who gave them most of their offense, accounting for 24 points on 8-of-17 shooting, adding five rebounds. Donta Hall was a force in the Alabama paint but fouled out with 5:04 left in the game, ending with 12 points and eight rebounds, going 6-of-6 from the floor. KeVaughn Allen was blanketed by ‘Bama’s defense and held to six points on a 2-of-7 night. Mike White credited Alabama’s output on the offensive glass and Hall’s performance as a whole in what kept the game close.

After taking a 4-0 lead via Donta Hall’s dominance in the paint, the Gators stormed back on an 11-0 run of their own to take an 11-4 lead with just three and a half minutes played.

Florida goes to Tuscaloosa and beats Alabama by 13. Not a huge win, but it's a loss you have to avoid if you want to play in the NCAA's.

With just over five minutes played, Alabama rallied back to bring the game within two points. The Tide were shooting 50 percent at the time, while the Gators offense excelled, finishing on 63 percent of their attempts.

Florida led by 7 with 11:18 left in the first half while shooting 64 percent from the floor and 40 percent from beyond the arc. Seven different Gator players had scored with a smidge above 11 minutes left to play in the first twenty minutes.

In a repeat of Saturday night’s game vs. Tennessee, Florida, and Alabama combined for 11 turnovers, split near evenly, in the first 12 minutes of play. The Gators scored seven points off of the Tide’s six turnovers, while ‘Bama turned Florida’s five giveaways into five points. UF led at this point of the game by 12 following a 12-5 run where UA hit only one field goal in almost five and a half minutes. 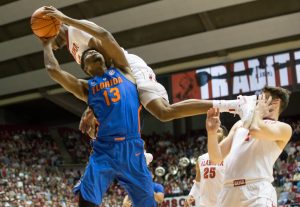 An 8-0 run for the Gators combined with a four and a half minute scoring drought by the Crimson Tide gave UF a 34-19 lead with 4:51 left in the first frame. Braxton Key was the one to finally end the streak of nine missed field goals by Alabama.

UA finished the first half on a 5:11, 15-4 run to diminish UF’s lead to only seven points at halftime. Braxton Key led all scorers, finishing the first frame with 15 of Alabama’s 31 points. Kevarrius Hayes and Canyon Barry led Florida with eight points apiece in the first twenty minutes, while Kasey Hill finished with a balanced stat line, with four points, five rebounds three assists and one steal.

Both squads struggled at the charity stripe in the first half, as Florida went 5-of-10 (50%) at the line, while Alabama converted only four of their 10 (40%) free-throw attempts. The Tide turned the ball over 9 times leading to 12 Gator points, but won the rebounding battle, 21-17, after 20 minutes of play.

A 6-0 run by Alabama brought the Crimson Tide within two points three and a half minutes of play in the second half. ‘Bama shot 5-of-7 to start the final twenty minutes. 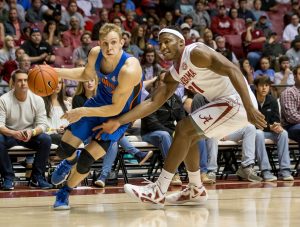 With 8:38 left to play in the game, Florida stayed within one point, thanks to Keith Stone’s strong play off the bench, adding 10 points on 3-of-5 shooting up to that point. Alabama was 10-of-24 from the charity stripe with 9:06 left in the contest.

Keith Stone gave Florida their first lead in eight minutes on a three-point shot over an Alabama defender. The Gators led by two points with 6:42 remaining in the game.

With 5:21 left, Donta Hall fouled out for Alabama after contributing 12 points and eight rebounds. Keith Stone would make one of two free throws off of the foul, giving Florida a 66-61 lead.

A three-pointer by Canyon Barry with 1:29 left was the dagger in the Crimson Tide’s coffin, as the Gators finished the game on a 24-8 run, winning 80-67 in Tuscaloosa. Florida’s next match-up comes on Saturday afternoon at noon, when UF takes on UGA at the Exactech Arena at the O’Connell Center.

“It’s going to be a dog fight,” added Mike White.