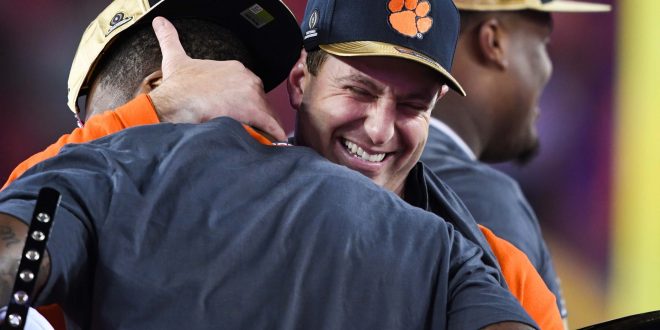 Six seconds left, Clemson possessed the football, Alabama led by less than a touchdown, and a destined team was driven to score: the perfect set up for a Clemson National Championship Win. Deshaun Watson caught the snap and threw a game-winning touch down pass to receiver Hunter Renfrow with just one second left on the clock.

Since Watson was a sophomore in high school, he tweeted about his dream of the day his team would have this opportunity. The five-year-old tweet talked about how much work he would place into a national championship game.

If I get a chance to play in a national championship game, Imma go ham.

Four years ago, he tweeted again about his national championship dreams.

Me. In a National Championship Game. I'm just waiting on that moment.

Other tweets told people how he would prove to them that he was a good player, including his tweet towards Georgia Coach Mike Bobo that said, “It’s funny how Mike Bobo don’t think I’m good enough to play at Georgia. Lol”

After leading Clemson to two national championships, Georgia regrets not recruiting him harder. Some may say that Clemson was the destined team. Others may say Watson is fortune teller. Whatever the case may be, it happened.

How Clemson Brought Home the Trophy

After years of waiting and tweeting, Watson shined bright in both national championships against Alabama. This year though, his teammates and himself brought home the gold. Clemson Head Coach Dabo Swinney said how necessary it was for them to win that trophy.

In last year’s national championship, Watson threw for 405 yards and had four touchdowns. In this year’s game, Watson came back throwing for 420 yards with three touchdowns. He completed 36 passes out of 56 attempts.

Most importantly, Alabama left too much time on the clock.

Whether it was destiny or not, Watson was at the right place at the right time to defeat the No.1 team. With the work of the whole program this year, Clemson was able to create a team that was able to take away a fifth national championship within eight years from Nick Saban. Sometimes, it is the underdogs’ time to win.