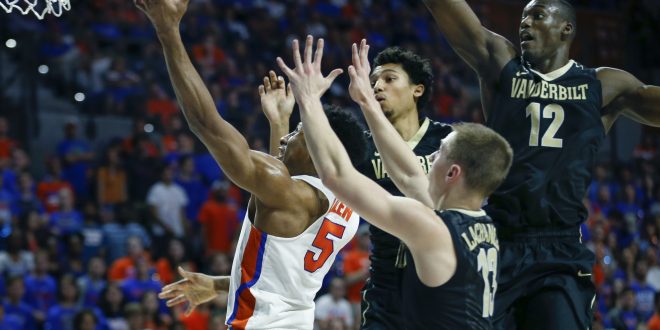 KeVaughn Allen did everything and more for the Florida men’s basketball team on Saturday afternoon at the Exactech Arena at the O’Connell Center, but it just wasn’t enough. The Vanderbilt Commodores took down the Gators, 68-66, despite Allen going for a season-high 29 points on 10-of-18 shooting from the floor and 5-of-12 from beyond the arc. Florida coach Mike White discussed Vanderbilt’s defensive approach after the game. He also added that the Rowdy Reptiles can’t be the only ones communicating for the Gators.

Devin Robinson, who finished with 12 points and six rebounds, combined with Allen for 41 of Florida’ 66 points. After being held to just 16 points over the last three games, Allen was electric shooting the ball in this game. White said that if Allen didn’t hit four or five difficult shots, the game would’ve been a blowout. Allen mentioned that Vanderbilt took a different approach towards him on defense than South Carolina.

The Commodores shot 10-of-25 from three-point range, led by Matthew Fisher-Davis, who finished with 19 points. Four of Vanderbilt’s five starters finished in double-digit scoring, including Fisher-Davis (19), Luke Kornet (11), Riley LaChance (11) and Nolan Cressler (10).

Vanderbilt shocks Florida in Gainesville. Gators will fall out of the Top 25 after back-to-back losses. The SEC — two and everyone else.

Kasey Hill and John Egbunu both had games to forget, combining for 10 of the Gators’ 12 turnovers. Hill did have two steals in the game, which propelled him to 10th on Florida’s all-time steals leader list. Canyon Barry, after four straight games of 13 points or more, was held to just six points on 3-of-8 shooting. Coach White, following the game, mentioned that the team’s huddles during timeouts had a very negative sense to them between players. He also said that the team’s assist-to-turnover ratio must improve in the future.

At a glance, both teams shot 46 percent from the field, but Vanderbilt held the advantage from beyond the arc, knocking down two more three-pointers than Florida with the same amount of attempts. The Gators had eight more points in the paint but trailed in both second chance and bench points. The Commodores closed the game strong at the free throw line and went 12-of-13 (92%) overall at the charity stripe. Vanderbilt is the best free throw shooting team in the SEC, knocking down 76.9 percent of their looks from the foul line.

Just 48 seconds into the game, Mike White was forced to call a timeout after Florida gave up a swift 5-0 run to Vanderbilt. Following the break, the Gators came out in a full-court press to up the pressure.

A quick 7-0 run got Florida back in the game, tightening the deficit to one with just over 15 and a half minutes left in the first frame. The Gators’ decision to go to the press allowed them to change the tempo in their favor, turning the game into a faster contest.

About midway through the first half, a combined eight turnovers were committed in eight minutes, offering a microcosm of the sloppiness of the game up to that point. After missing seven of their last eight shots, Allen knocked down a long two-pointer to tie the game up at 13 with seven and a half minutes left in the first 20 minutes.

John Egbunu gave the Gators just their second lead of the game with a minute and a half left in the first half on a thunderous slam over the Commodores’ defense. Florida took a 27-25 lead on the shot, marking their first lead of longer than eight seconds in the first half.

The Gators ended the half on a tenacious 10-2 run, hitting seven of their final eight shots. Devin Robinson hit the final shot of the half on a tip-in from just beyond the block. KeVaughn Allen led all scorers in the first half with 14 points on 5-of-8 shooting from the floor, going 2-of-4 from downtown.

Both teams were successful at creating turnovers in the first frame but far less efficient in converting the opportunities. The Gators forced eight turnovers, leading to seven points, while the ‘Dores finished with nine takeaways, turning into only five points. Florida won the rebounding battle, 21-15, and finished with four more defensive and offensive rebounds than Vanderbilt.

Riley LaChance was lights out for Vandy in the first half, converting 3-of-3 from downtown, leading to nine total points. The best three-point shooting team in the SEC was held to a clip of only 5-of-14 (36%) from beyond the arc. Despite leading at halftime, Florida only led for 57 seconds in the first half.

A scoring drought of over two minutes about a quarter of the way into the second half brought Vanderbilt within two points of the Gators. The Commodores hit five of their first seven shots to open up the final 20 minutes.

Vanderbilt took their first lead of the second half after 11 minutes of play on a completed three point play by Joe Toye. A 9-0 run, which included Toye’s three-point play, put the Commodores up by four points with 7:48 left in the game.

Florida tied the game as KeVaughn Allen continued to terrorize Vanderbilt’s defense. Allen had 26 points through 35 minutes of play, setting a new season-high.

With just a minute left in the game, Kasey Hill went one for two at the foul line to bring the Gators within two points of the Commodores. Hill has routinely struggled from the free throw line this season, and could not come up big for Florida late in the game.

Florida held possession with seven seconds left, but couldn’t convert on a contested, KeVaughn Allen corner three for the win. Vanderbilt grabbed the rebound and came away with the win, taking down the Gators, 68-66.

Florida will have three days of rest before traveling to Baton Rouge to take on the LSU Tigers on Wednesday night at 9 p.m.

Previous No. 2 Florida Gators Gymnastics Defeat UNC
Next Falcons Hope to Finish Strong in the Dome