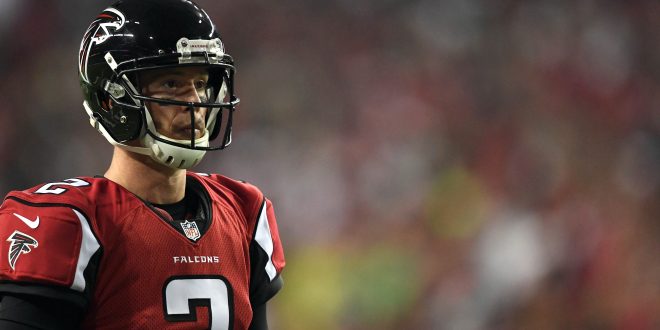 Jan 14, 2017; Atlanta, GA, USA; Atlanta Falcons quarterback Matt Ryan (2) waits for the official to whistle to head to the huddle during the 2nd quarter of the NFC Divisional playoff against the Seattle Seahawks at Georgia Dome. Mandatory Credit: John David Mercer-USA TODAY Sports

Falcons Hope to Finish Strong in the Dome

After 25 years of cheering on high school, college and NFL teams, fans will get to see the Atlanta Falcons play in the Georgia Dome for the last ever game played in it. The Falcons did not think that they would be playing in the NFC Championship game at home, but after a Green Bay Packers upset over the Dallas Cowboys, the Falcons will get to play the biggest game of their season thus far at home.

The Atlanta Falcons offense has been playing unlike anything we’ve seen in a while. Not only do they have one of the best quarterbacks and arguably the best wide receiver in the league, they have two of the best running backs to help produce in all facets on the offensive side of the ball. The Falcons offense averaged 33 points a game and had a total of 540 points in the regular season which is the seventh-best in NFL history.

The playmaker of the offense and someone the Falcons can count on because of his multitude of game-winning drives is Matt Ryan. Ryan, who finished the regular season with 4,944 yards, 38 touchdowns, seven interceptions and a passer rating of 117.1, is someone head coach Dan Quinn and the whole team can count on in big games like this. Ryan’s 117.1 passer rating this season is recorded as the fifth best in NFL history. This is unique because Ryan isn’t a selfish guy who passes the ball only to one or two guys. Thirteen receivers have accounted for his 38 touchdowns this season.

Although the Falcons defense is not as high-powered as their offense, they have stepped up at a crucial time of the season allowing 20 points or less in their last four of five games. But, as many have seen Aaron Rodgers is playing his best ball this season leading the team to eight straight wins.

The Falcons defense has a couple players that have helped them get to where they are. Outside linebacker Vic Beasley leads the group just like he leads the NFL in sacks with 15.5. Additionally, there are two rookies that have led the team in tackles this season: Deion Jones and Keanu Neal. Both were very productive always making plays whether it was interceptions, defensive touchdowns or forced fumbles. Neal, who played his college ball at the University of Florida, had some praise for Aaron Rodgers. Neal said that Rodgers is so good at reading defenses that he thinks sometimes Rodgers knows what they’re doing before the ball is snapped.

Look for the Falcons defense to work heavily on containing Rodgers in the pocket as they know how good he is at extending plays and finding the open receivers.

Week 8 of the regular season was a battle between these two teams and if the NFC Championship is similar to this game in any way than we have a game to look forward to. The Falcons beat the Packers 33-32 on a game-winning touchdown from Matt Ryan to Mohammed Sanu with 11 seconds left in the game. Both quarterbacks showed why they are two of the best in the league, Rodgers going 28 for 38 for 246 yards and four touchdowns and Ryan going 28 for 35 for 288 yards and three touchdowns. The Falcons have the upper hand though considering the injury of leading receiver for the Packers, Jordy Nelson, who was injured in the wild card game against the New York Giants with broken ribs.

Make sure to tune in here starting at 3 p.m. to catch a great one. If there is one game to sit down and watch this weekend, it’s this one.