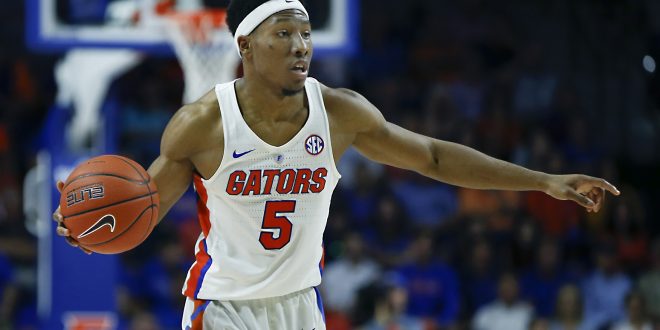 They say the night is darkest just before the dawn. The Florida Gators hope they’re past their dawn after losing two straight games for just the second time this season. The No. 25 Gators take on the LSU Tigers at 9 p.m. on Wednesday night in Baton Rouge and could use nothing more than a solid victory against an average SEC foe. At Tuesday’s press conference, Mike White attributed some of the team’s downfall to their inability to handle winning thus far.

Blakeney Gets It Done

LSU is a far from a volatile offense, averaging 76.1 points per game, which ranks seventh in the conference. While the Tigers haven’t had that much success as a unit, Antonio Blakeney has been the go-to-guy in Baton Rouge. Blakeney was a member of the star-studded class of 2015 for LSU, and was the 15th ranked recruit in the country. He was a McDonald’s All-American and a teammate of Ben Simmons in his only year at Louisiana State University. Blakeney is averaging a team-leading 16.7 points per game on 47.3 percent shooting from the field. He ranks second on the team in rebounds per game at 5.1 and has made at least five shots in eight of his last ten games.

What has stood out about Blakeney even more than his scoring ability as of late is his ability to produce turnovers. The sophomore from Sarasota has three steals in three of his last six games, including the team’s most recent loss to Arkansas on Saturday, in which Blakeney had 14 points, four rebounds and three steals. White described Blakeney and Brandon Sampson as two of the SEC’s most explosive players.

Following Blakeney on the scoring leaderboard for LSU are two guys from two completely different backgrounds. First, we’ll start with Duop Reath. Reath, like Gorjok Gak, is from the land down under. Unlike Gak, Reath was born in Perth on the complete opposite side of the country from Sydney, where Gak is from. Reath is averaging 13.8 points and a team-leading 6.2 rebounds per game after Craig Victor II, the team’s leading rebounder, was kicked off the team just eight games into the season. He’s ranked fifth in the SEC in field-goal percentage shooting at a 54.4 percent clip from the field, while knocking down 44.4 percent of his shots from downtown. Reath scored in double-digits for the fourth time in five games in the team’s latest loss vs. Arkansas. The academic junior finished with 17 points, seven rebounds and two blocks in a team-leading 34 minutes played.

Brandon Sampson is the Tigers’ third biggest scoring threat, but comes to LSU from a bit closer than Australia. Sampson grew up in Baton Rouge and attended Madison Prep Academy during his high school years. Madison is a short 15-minute drive to the Pete Maravich Assembly Center, where LSU plays their home games. Sampson averages 10.8 points per game on a solid 48.6 percent from the floor. Despite his ability to drop buckets, Sampson, vs. Arkansas, scored in double-digits for the first time in almost three weeks. He finished the game with 15 points, while shooting 6-9 from the field and 3-for-5 from beyond the arc.

If LSU head coach Johnny Jones encountered a genie in the Bayou and was given one wish, I’d reckon it’d have to do with defense. The Tigers rank 321st in the country, and second-to-last of any Power5 school, in points allowed per game. LSU gives up an average of 79.5 points per game and have allowed at least 81 points in four of their past five games, all of which they’ve lost. Florida’s offense isn’t all that and a bag of marbles, finally dropping below the top 100 scoring teams in the country. But if Jones thinks his defense will get the night off, they’re in for a rude awakening.

No Barry, No Problem?

Canyon Barry is questionable for Wednesday night’s game after spraining his ankle during practice on Monday afternoon. Barry was described as “50/50” by Coach Mike White, who said he saw swelling on Barry’s ankle after the accident. The graduate transfer from College of Charleston is the team’s second-leading scorer, averaging 12.4 points per game while shooting 42.3 percent from the field and 31.1 percent from three-point range.

While KeVaughn Allen is known as the shy guy to many teammates, coaches and media members, his play was roaring in the Gators’ last game vs. Vanderbilt. Allen dropped a season-high 29 points, finishing just three points short of his career-high. He shot 10-18 from the floor in that game and knocked down five of his 12 three-point looks. Despite being held to 16 points in his previous three games, Allen re-gained his scoring knack and looked strong on his drives to the basket and looks from downtown. He currently leads the team in points per game and three-point percentage, finishing on 45.2 percent of his looks from the field and 38.8 percent of his shots from beyond the arc. White summarized Allen’s approach this far and how he can continue to improve.

Florida has had difficulty in coming out of halftime with a fire in their hearts. Per the team, against their 12 highest rated opponents this season, the Gators have allowed 76 percent shooting from the field in the first four minutes of the second half and are allowing a 60 percent defensive rebounding rate in the same time span. White said that he may just start his five highest-energy players in the second half vs. LSU.

In KenPom’s latest overall rankings, the Gators come in at 16th in the nation, sitting above every other team besides Kentucky. The Tigers ranks 147th, sandwiched between Weber State and Elon. In offensive efficiency, Florida once again comes in ahead of LSU, ranking 31st in the country to the Tigers’ 78th. In defensive efficiency, the teams couldn’t be further apart, as UF ranks 16th in the NCAA, while LSU comes in at an extremely low 233rd.

LSU is yet to be seen in an AP Poll this season, but the Gators are no stranger. Despite two straight losses, Florida ranks 25th in the newest poll, receiving six more votes than the 26th ranked team, Kansas State. When it comes to Bracketology, the Tigers are once again missing in action. For Florida, two straight defeats doesn’t only mean a drop in the AP Poll, but a fall in Joe Lunardi’s book as well. The Gators dropped two seeds in the latest bracket, falling to the #6 seed in the Midwest Region. Florida would face mid-major powerhouse Middle Tennessee State in Indianapolis according to the latest Bracketology.

Wednesday night’s game tips off at 9 p.m. from the Pete Maravich Assembly Center and can be seen on the SEC Network, with Dave Neal and Chris Spatola on the call. As always, you can listen to the game on the Gator IMG Sports Network with Mick Hubert and Bill Koss.