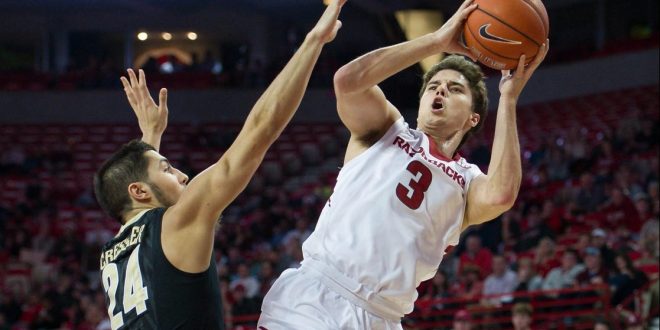 After a third win in a row for (15-4) Arkansas on Saturday night against LSU, the Razorbacks are hungry for another “W” in their game against Vanderbilt on Tuesday at 8:30 p.m. at Memorial Stadium in Nashville. The (9-10) Vanderbilt Commodores with a (3-4) record within their own conference are coming off a 68-66 win over the No. 19 ranked Florida Gators. Within the SEC, the Razorbacks are (4-3), a close record to the Commodores which could make for a teeth-clenching game Tuesday night.

In Arkansas’ 99-86 win over LSU, Razorback Center Moses Kinglsey scored a season-high of 24 points. Also, Kinglsey was officially declared the 40th player in Arkansas’ history that went over the 1,000-point mark. He reached this mark in the second half of the game.

For the second-half of the Commodores game over Florida, Vanderbilt scored 12 points in a row in the second half with the Gators scoring none during that time. With just seven minutes left of playing time, the Commodores were up 56-49.

Had a big win on Saturday, and we need you at the game Tuesday to help us get another one! Hopefully these highlights get you in the mood. pic.twitter.com/rzArjQzmpV

Average Assists Made Per Game: 16

Percentage of Shots Made beyond the Arc Per Game:37.8%

Percentage of Shots Made from the Free Throw Line: 75.7%

Free Throws Made This Season: 358

Arkansas’ top shooter is Daryl Macon shooting an average of 14.1 points per game. Macon has attempted 178 field goal shots this season and has successfully made 78. Macon’s 3-point field goal percentage per game is 38.7%.

Average Assists Made Per Game: 14

Free Throws Made This Season: 275

In the last seven games for Vanderbilt versus Arkansas, the home team has won five out of seven of them. Although the statistics show that Arkansas has played a better season, Vanderbilt has a great chance with the home team advantage.

Previous P.K. Yonge Girls Basketball Team Looks to Rebound Against Gainesville Hurricanes
Next Historic Night as No. 1, 2 and 4 Teams Lose