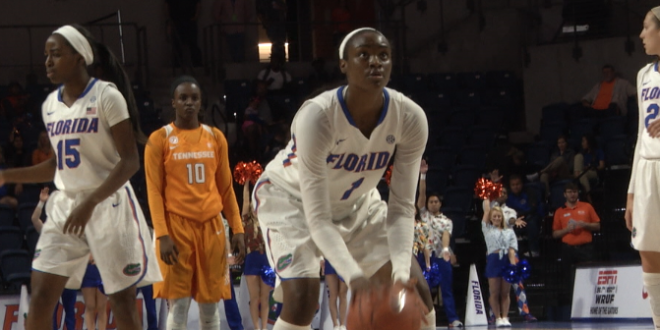 The Florida women’s basketball team was unable to keep the momentum going from their win over Georgia, falling at home to the Tennessee Lady Vols 84-75 on Thursday night. The loss drops Florida to 10-10 and to 1-6 in the SEC, while the win improves Tennessee to 13-7 and 4-3 in the SEC.

Florida out rebounded Tennessee 42-30, including a 21-8 advantage on the offensive glass. In addition, the Gators largely held Tennessee’s Mercedes Russell in check, limiting her to 14 points and five rebounds.

It didn’t matter in the end though, as the Lady Vols led wire to wire.

Lady Vols get the win on the road against Florida, @DDDeshields drops 27 points to lead Tennessee! pic.twitter.com/TnflIGISWs

Tennessee used a balanced offensive attack to make up for the extra attention on their star center. They had four players score in double digits, led by Diamond DeShields who scored 27 points including eight of them from the free throw line. Jamie Nared, who got things going for Tennessee with three three-pointers in the first quarter, ended up with 16 points and played all 40 minutes of the game. Florida head coach Amanda Butler gave credit to Tennessee’s scorers, especially DeShields, saying that she shot the ball well and did a good job of getting to the free-throw line.

The Lady Vols got off to a blistering start in the first quarter, jumping out to a 25-8 start with 4:04 left in the first quarter. They were aided by Nared’s proficient shooting from downtown and by their stingy defense, holding Florida to 9 for 21 shooting in the opening 10 minutes. The Gators did go on a 9-0 run to close the quarter and cut the deficit to 27-19.

It seemed like the game would stay close after Florida started the second quarter in a similarly hot manner, getting to within four points at 27-23. That would be the closest they would get the rest of the game.

Tennessee closed out the quarter on a 21-11 run over the last seven and a half minutes, entering halftime with a 48-34 lead. The Lady Vols shot 56.9% from the field in the first half, including going 6 for 11 from downtown.

Lorenzen talked about how the team dug itself an early hole due to a lack of execution on the defensive end of the court.

end of first half … Gators have some work to do in the second half#GoGators pic.twitter.com/zpOSMs0ag9

Butler said after the game that she was disappointed with how the team came out in the first half, especially knowing that Tennessee was going to start the game fast.

Tennessee really started to get the Gators in foul trouble and get to the free-throw line in the third quarter. They went to the free throw-line 16 times in the quarter, a big chunk of the astounding 35 free-throws they took during the game. They needed that help from the charity stripe because the Gator defense clamped down in the second half. They held the Lady Vols to just 33% shooting in the quarter. Nonetheless, the Gators were still down by 13 entering the fourth quarter.

Lady Vols go 14 of 16 from the charity stripe that quarter, lead by 13 points heading into the fourth! @AMidd33 has nine points! pic.twitter.com/O4VODFa6aR

The fourth quarter, however, showed some of the fighting spirit that has become a feature of this Gator team. They went on a 17-8 run in the quarter to come to within six points. That run included six points from Fleming and five from Williams, as the Gators continued to dominate the paint. Florida ended the game with a 44-34 edge in the painted area. The hustle points showed up in the form of second chance points, where they outscored Tennessee 17-5 for the game.

In the end, it just wasn’t enough for the Gators though, as Tennessee held on for the 84-75 victory. After the game, Tennessee head coach Holly Warlick did give credit to Florida, saying that she’s surprised the team is 1-6 in SEC play because they are a team that never gives up and always fights to the end. Butler also made note of how her team fought in the second half, saying that more closely resembles who her team is.

The loss means Florida is now 4-49 all time against the Lady Vols, and remain towards the bottom of the SEC standings.

Florida will look to bounce back on Sunday when they take on Vanderbilt.