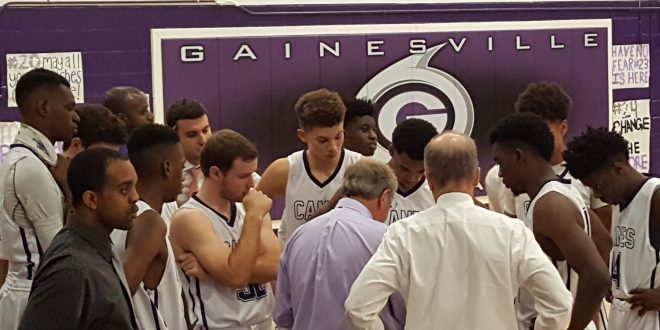 The Gainesville High School Purple Hurricanes (19-2) hosted the Vanguard High School Knights (15-6) in a crucial 7A District 4 match in boy’s basketball on Thursday night.  The Canes continued their 11-game win streak finding after beating Vanguard in a very scrappy game 51-48.  With the win, Gainesville and Vanguard find themselves tied in the district standings with a record of 7-1. Gainesville High won the tiebreaker decided by a coin toss and will host the district tournament in a couple of weeks.

A Game to Learn From

It was a highly contested game all the way up until the end with neither team ever achieving a double-digit lead. With one last chance, Vanguard heaved a contested shot from well beyond the arc that bounced off the back iron, sealing their fate.  The shot left one side of the gym ecstatic and the other in stark silence.  The game was so close that Gainesville coach Kelly Beckham said he was just glad to come out with a win.

There were positives as Gainesville’s Christian Miller-Caldwell was the high scorer with 16 points with forward Isiah Wilson was not far behind with 11 points.  The team emerged victorious and will move on to play in the districts but Beckham is focusing on winning the regular season games ahead before turning his attention towards districts and a possible rematch with Vanguard in the final.